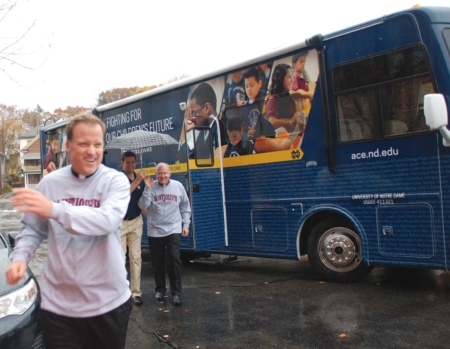 BOSTON -- Two local Catholic schools were visited last week by Notre Dame University's Fighting for Our Children's Future National Bus Tour, which gave the schools a chance to participate in the celebration of the 20th year of the university's Alliance for Catholic Education (ACE).

With scheduled stops in 41 cities throughout the continental United States, in the archdiocese the bus tour stopped at St. Joseph Preparatory High School in Brighton Nov. 7 and to St. Monica School in Methuen on Nov. 8.

Traditionally, at schools the tour visits, students rally outside the school to greet the brightly colored bus, which is decorated with the name of every Catholic school in the United States. However, because of rain, students at St. Joseph Prep assembled in the school auditorium.

At the St. Joseph's stop, students and educators of the school heard from co-founders of ACE Father Sean McGraw, CSC, and Father Tim Scully, CSC, who presented the University of Notre Dame Sorin Award for Service to Catholic Schools to the Sisters of St. Joseph.

Presenting the award, Father McGraw told the assembled students, "One of the things that we want to do in all of the communities is we want to celebrate people who have just done amazing things to serve you, and to help young people become who they are."

Congregation president Sister Rosemary Brennan, CSJ, and Sister Kathleen Carr, CSJ, who serves as director of planning and operations for ACE Consulting, received the award in the name of the congregation.

Recipients of the award, and the University of Notre Dame Champion for Education Award, will be featured by ACE after the bus tour concludes in May.

Recognizing the work of head of school Tom Nunan, Father Scully said, "The one thing that we have learned over the last 20 years, since we started our journey in the Alliance for Catholic Education, is that everybody is tremendously important for making a school successful, but there is one person without whom success is impossible."

In addition to hearing from ACE about the value of Catholic education, the school and students also had the opportunity to showcase their own talents and experiences.

Students sang, one group as a choir and another as a trio, to demonstrate their commitment to the arts.

"Notre Dame is actually one of my top choices for schools, so it was a great opportunity to get up in front of the school and sing with the choir and represent our school, because Catholic education is really what it's all about," said senior Danielle Civitarese.

Students also demonstrated an application of their science, technology, engineering, and mathematics skills, when the robotics team rolled out their most recent creation.

The robot drove down the aisle, between seated students, and fired off flying disks into a designated spot in the gymnasium -- demonstrating the precision of the machine and the competence of the students who created it.

The "Firebirds" varsity team competes annually in the FIRST (For Inspiration and Recognition of Science and Technology) Robotics Competition, a program where students design, budget and build a robot for international competition.

Freshman member of the robotics team Elaine Wang said she took pride in representing her school as part of the team.

"There are a lot of programs you can join, and this one no doubt is the most impressive one," she said.

A senior member of the team said he enjoyed the opportunity to see the robust nature of Catholic education as ACE presented it that day.

"We are all part of this big thing, all part of the Church. Having visitors come, and to be able to see these other parts in that they are just like ours, and they are different too. That is really eye opening for us, especially for me as a senior. I'm going off to college, and there is a lot of great Catholic colleges like Notre Dame available, and you get to continue that education and the spirit of community I have come to know," senior Danny Donabedian said.