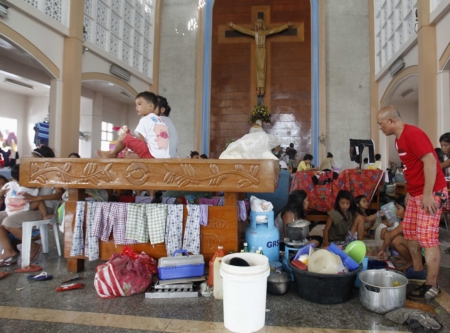 Survivors cook their meals inside a Catholic church converted into an evacuation center Nov. 10 after Typhoon Haiyan battered Tacloban, Philippines. Cardinal O'Malley has scheduled a special collection for typhoon relief efforts at Masses of Nov. 16 and 17. CNS photo/Romeo Ranoco, Reuters

BOSTON -- The Archdiocese of Boston responded to the tragedy faced by the people of the Philippines and Vietnam impacted by Typhoon Haiyan, in the days after the storm, as parishes organized Masses and Cardinal Seán P. O'Malley announced a special collection for relief efforts.

"The Archdiocese of Boston and the international Catholic community stand in solidarity with our Filipino brothers and sisters in the wake of the events of Typhoon Haiyan," Cardinal O'Malley said in a statement Nov. 10.

"In this time of crisis we turn to our Lord Jesus Christ, who has promised to be with us always, in prayer for the repose souls of those who perished in the storm and for the strength to bring the needed healing to the injured and to assist the Philippines in recovering from this natural disaster," Cardinal O'Malley said.

St. Joseph Parish in Malden hosted a Mass for the Filipino Catholic community, Nov. 10, and the Ethnic Apostolate of the Archdiocese of Boston announced a Mass to be celebrated at the Cathedral of the Holy Cross in the South End at 6:30 p.m. on Nov. 16.

In addition to prayers, the archdiocese is committing material resources to relief efforts.

In a letter dated Nov. 12, the archdiocese announced that Cardinal O'Malley had approved a special collection to be taken up at Masses on the weekend of Nov. 16 and Nov. 17 to support relief efforts.

The letter said the special collection will assist those directly impacted by the storm as well as "rebuilding of the Church in the affected areas, so that the Church may be restored in her ability to serve the people."

All funds collected will be distributed to Catholic Relief Services.

"As reports continue concerning the loss of life and the devastation of this storm, possibly the most severe in recorded history, we are committed to provide all possible assistance and support," the cardinal said.

The cardinal, who was attending the annual meeting of U.S. bishops in Baltimore, committed his support locally and in national solidarity with bishops of the United States.

"At this time I am joined with the bishops of the United States, gathered in Baltimore for the annual meeting, in developing a plan for outreach to the Filipino community and a national collection to assist with relief efforts and the rebuilding that will be necessary in the Philippines," he said.

Father Cyriac C. Mattathilanickal, MS, chaplain of the Filipino Apostolate of Boston, celebrated the Nov. 10 Mass at St. Joseph in Malden for the Filipino people. St. Joseph is home to a significant Filipino Catholic community in the Archdiocese of Boston.

"We do know a number of families who have been directly hit by this. Their families, their relatives back in the Philippines, have been affected by this event," he said.

He said the collection that day went toward relief efforts, and people at the Mass seemed to do whatever they could to help.

"One thing about the Filipinos for sure is that there might be many typhoons that will come, but the typhoons can destroy their homes, and their houses, and the infrastructure, but the tenacity, the resilience of the people to fight back, to bounce back, stems from their deep faith. They are deeply religious people, so their faith comes to their rescue," Father Mattathilanickal said.

All are invited to the Mass at the Cathedral of the Holy Cross, Nov. 16, expected to be concelebrated by Father Mattathilanickal and director of the Office for Outreach and Cultural Diversity of the Archdiocese of Boston Father Michael Harrington.