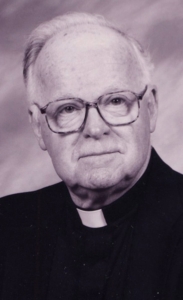 West Regional Bishop Walter Edyvean was the principal celebrant of the Funeral Mass for Msgr. William J. Forster on Oct. 28 at Our Lady Comforter of the Afflicted Church, Waltham. The bishop had been at Rome's Pontifical North American College while a student at the Gregorian University preparing for the priesthood, while Msgr. Forster had been the economo or business manager of the seminary.

A Waltham native, he was born in Brighton's St. Elizabeth Hospital on Sept. 20, 1929, the only son of the four children of the late Alphonsus and Helen (Drew) Forster. He attended local Catholic schools and was graduated from St. Mary High School Waltham where he was both an outstanding student and athlete anchoring the school's football team as quarterback.

He entered St. John's Seminary in 1947, and in 1951 was sent to the recently reopened and newly constructed North American College. The seminary's rector, Bishop Martin J. O'Connor ordained him to the priesthood in the College's chapel on Dec. 8, 1954. He returned to the archdiocese in July 1955 and served for one year at Sts. Peter and Paul, South Boston, which at the time housed more than two dozen priests who worked in various "office jobs."

He returned to Rome the following year and resumed studies at the Gregorian University; back to the archdiocese in 1958, he was for one year an assistant at St. Joseph, Lynn. In April 1959, he was named economo at PNAC and at the same time, Blessed Pope John XXIII named him a papal chamberlain with the title of Monsignor. He served his alma mater for almost a decade (April 1959 to October 1968) before returning to the archdiocese as vice chancellor (1968-1972). He was subsequently chaplain at St. Sebastian School, then in Newton (1972-1975).

Bill had great stories; two he especially relished. As American, he was always looking for a "good steak" in Rome and he struggled to find it. Among his favorite eateries was l'Ambasciata d'Abruzzo; he convinced the owners to get a real steak on the menu and they did -- and named it "Bifsteak a la Forster."

The other story, also set in Rome while he was business manager, involved the famous Mother Pasqualina Lenhert, housekeeper and friend of Pope Pius XII. Following that pope's death she had been moved, by many accounts "unceremoniously," out of the Vatican and given "refuge" at the convent of her sisters who were then the domestic staff of the College.

She apparently did not agree (to be kind) with Msgr. Forster's administration of the college. She used her waning influence to side track his work. One day, he related, he was asked to bring some documents to the Roman Curia; one was to be hand delivered to a specific Roman Curial archbishop.

He dutifully made the deliveries and the last one turned out (unknown to him) to be a note from Mother Pasqualina. The archbishop, on opening the letter, burst into laughter, called Bill back and asked, "Do you know what's in this?" Honestly not knowing Bill replied "No" -- "She wants me to fire you!" On March 23, 1968, Pope Paul VI named him a Prelate of Honor, apparently to the chagrin of Mother Pasqualina.

Following his "Roman Adventures" he returned to the archdiocese first as administrator (October 1975) and then as pastor (May 1985 to September 2000) of St. Therese of Lisieux Parish in Everett.

He was granted senior priest status in 2000 and lived in his own residence in Revere until 2010 when declining health required his moving to St. Patrick Manor, Framingham where he died on Oct. 22.