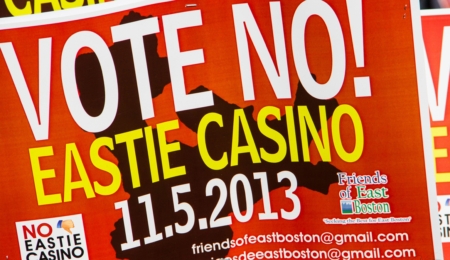 With roughly $2 million pumped into the campaign to push the casino deal and the support of local politicians -- including Boston Mayor Thomas M. Menino -- the approval of the development at the race track appeared likely. However, a statewide opponent of the plan said facts ultimately trumped spending.

"The other side has the resources, but we have the truth on our side, and once we start talking about the truth and we have the time to get that message out, people reject casinos," said John F. Ribeiro of Winthrop, chairman of the Committee to Repeal the Casino Deal.

However, because the Suffolk Downs property lies both in East Boston and Revere, the 2011 casino law required the plan be approved by voters in both communities.

Ribeiro said the law as written makes the project unviable as a result of the vote.

"There really is no way that this just moves forward, unless laws and rules are changed and or broken," he said.

Speculation on the possibility of a development contained entirely on the 52 acres of Suffolk Downs property in Revere continued after Mayor Dan Rizzo told local media he would pursue that option. A casino entirely in Revere would require a drafted proposal by Dec. 31 of this year.

"They had two years to pick a partner to run the proposed casino, and they failed at that. What makes anybody think that in less than three months -- two months really -- that they can put this whole new package together and make it work?" Ribeiro asked.

Former of Boston mayor and Ambassador to the Vatican Raymond Flynn participated in efforts to oppose the casino deal, and said the vote was a triumph for local concerned citizens over powerful financial and political interests.

"The people's victory over money and power was extraordinary. This is no exaggeration. This is not hyperbole. This was the greatest neighborhood victory for social justice that I have ever seen," Flynn said.

Flynn said he would rather see a $1 billion project provide jobs by building a medical research facility in the area. With experience meeting experts, speaking at universities and colleges, and writing columns in local media outlets, Flynn advocates for greater research capabilities in healthcare -- inspired by his seven-year-old grandson Braeden who has a rare condition that impairs his ability to walk or speak.

"The need is there. It's a question of, as a country, whether we have the moral priorities," he said.

A parishioner at Most Holy Redeemer in East Boston, Pedro Morales is the lead organizer for the group Friends of East Boston, which organized an interfaith anti-casino rally at the parish Oct. 20.

Morales said the neighborhood faith community was united in opposition to the plan.

"We all believe strongly that God has a better plan for East Boston than a casino, that we can do better than any of this, if we join forces," he said.

He said the movement at Sacred Heart Parish in East Boston spread to Most Holy Redeemer and throughout the faith groups of East Boston to oppose the interests behind the casino plan.

He said, going forward, he would like to fight for repeal of the law that led allows resort casinos in Massachusetts.

Deacon Frank McHugh of Most Holy Redeemer said the parish's pastor, Father Thomas S. Domurat, served as a Catholic spokesperson on the issue and encouraged parishioners to get involved through the groups Friends of East Boston and No Eastie Casino. Morales and Deacon McHugh pointed to Father Domurat as playing an important role in bringing together faith groups in East Boston.

"It was a tremendous effort by the faith community in East Boston," said Deacon McHugh.

Father Domurat said his efforts simply helped motivate his parishioners and other people in the community to stand up for their beliefs. He noted that Buddhists, Muslims and other Christians participated in public advocacy alongside the Catholic community.

"They really did put their faith into practice," he said.