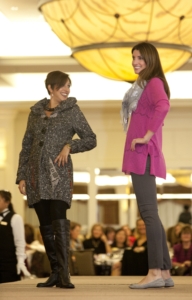 The event featured fashions by Ports and Company of Cohasset and Susan Wornick of WCVB-TV served as master of ceremonies.

All proceeds from the event support the basic needs programs and services of Catholic Charities South, such as providing food, home heating and rental assistance to those in need, as well as developing a wide range of educational programs for children and adults that provide paths to self-sufficiency.

BOSTON -- Catholic Charities of the Archdiocese of Boston launched its sixth annual Friends Feeding Families Brown Bag Campaign, Oct. 1, designed to raise awareness and support within local communities around challenges people have feeding their families throughout the year.

The goal of the campaign, which runs through Dec. 31, is to raise $1 million in donations and collect more than 5,000 bags of non-perishable food to stock Catholic Charities food pantries.

"With the help of our neighbors, partners and donors, we are working hard to meet the increasing demand in communities across the state," said Deborah Kincade Rambo, president of Catholic Charities.

The annual campaign raised over $3.5 million and collected thousands of bags of food since it began in 2008. Brown bag events have been hosted by businesses, families, churches, schools, and community groups. For more information visit www.ccab.org/friendsfeedingfamilies/index.

BRIGHTON -- St. John Seminary announced, Oct. 2, that the seminary received a $250,000 grant from the Flatley Foundation, for a second phase of construction on the Our Lady of the Presentation Lecture Hall, Library, and Residence in Brighton's Oak Square.

The former church was closed in 2004 and St. John Seminary became owners of the property in 2012. A ribbon-cutting ceremony was held at the new campus in September.

The seminary plans to restore the former rectory into a residence for seminary use, as well as a conference facility -- with conference rooms to be named for Bishops John D'Arcy and John Boles, both of whom hail from the former parish.

"Thanks to the generosity of the Flatleys, seminarians, priests and all who are dedicated to the Church will hear exciting presentations in this new Lecture Hall for years to come," said rector Msgr. James Moroney.

Induction is meant to recognize the cumulative body of a recipient's work as it applies to academic achievement; both at Archbishop Williams High School and beyond.

Sister Ann Marie currently serves as a representative of the Maryknoll Sisters' non-governmental organization to the Economic and Social Council at the United Nations, and as co-chair of the NGO Committee on Sustainable Development.

Sr. Ann Marie recalled as one of her fondest memories at the Catholic high school hearing a Maryknoll sister speak and point out, "to be a missioner one needs a funny bone."

Cohasset parish begins 'Blessing of a Child in the Womb'

COHASSET -- A recent directive issued by the U.S. Catholic Bishops encourages parishes to incorporate into their communities a new blessing for unborn children. In keeping with the new directive, expectant parents, their family and friends, along with parish members gathered on Oct. 27 at St. Anthony Church, Cohasset, to witness and celebrate the reception of the "Rite for the Blessing of a Child in the Womb."

Two couples, Dennis and Anya Rooney and Peter and Carlie Whoriskey, were present for the blessing of their unborn child. The pastor, Father John R. Mulvehill, imparted the blessing. Deacon Paul Rooney proclaimed the Gospel according to Luke, which detailed Mary's visit to her cousin Elizabeth, and the revelation of the Christ child present in the womb of his mother, Mary.

Father Mulvehill said, "This is a momentous occasion in that the Church, which has always recognized the value and integrity of each human life, can acknowledge and bear witness to the child in the womb even at the earliest stage through the new approved rite. This is very profound and no doubt will promote respect for life."

The Church of St. Anthony will impart the blessing four times a year.