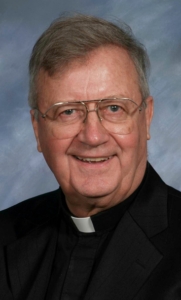 "I am wonderful; God loves me and you too." The inevitable and enthusiastic response of Father John Hannon when you asked "How are you, John?" The pastor at St. Joseph the Worker in Hanson for the past 18 years, during which time he saw dramatic growth in Catholic population and the construction of a new church, Father John Hannon died suddenly in Sandwich on Oct. 18. He had gone to his Cape home just after the funeral of the previous pastor of the Hanson parish, Father Edward McLaughlin, in Bridgewater on Oct. 17.

A native of Watertown and son of St. Patrick Parish there, he was born Sept. 22, 1934 to the late Mark and Ella (McGuire) Hannon. The family of three sons and three daughters lived on the South Side of the town. He attended St. Patrick parish grammar and high schools and on graduation in 1952 enrolled at Boston College. He transferred across Commonwealth Avenue to St. John's Seminary and on Feb. 2, 1960 Richard Cardinal Cushing ordained him to the priesthood at Holy Cross Cathedral.

Following ordination he was assigned as an assistant at St. Colman of Cloyne Parish in Brockton; it would be the first of five parish assignments over the next 53 years. From the compact and busy parish life at Brockton in 1966, he was appointed assistant at St. Edward the Confessor in Medfield, the town then still more rural but showing signs of population growth.

Eleven years later, he was back in the city, this time at Boston's St. Matthew Parish in a team ministry with the late Father Laurence Kelley; while at St. Matthew's he served as co-director of the Cardinal's Stewardship Appeal. Following his five years in Dorchester he was appointed in July 1982 first as administrator and then in December of the same year as pastor of St. Patrick Parish, Stoneham. During his 12 years at Stoneham, he was back in a very busy parish, with an elementary school and large staff and a church that barely suited the Catholic population of the one parish town. He renovated and enlarged the church during his tenure.

Having shown both his ability and willingness to take on a challenge, Father Hannon found himself back down south to Hanson where Cardinal Bernard Law had foreseen the need for a new church to accommodate the growing Catholic population of that area of the archdiocese. In June 1995 he was named pastor in Hanson and over the past 18 years has built up the parish spiritually and fiscally and greatly improved the physical plant, notably with the new church. He also served as vicar forane in the South Region's Plymouth Vicariate from 1996-1999. For the past several months, he has also been the administrator of Our Lady of the Lake Parish in neighboring Halifax.

John or as almost everybody, except his family and friends from Watertown, called him "Mark" was evidently a man of enthusiasm and conviction. Father Thomas Nestor, homilist at the Funeral Mass said "From the moment of his baptism he was filled with joy and that became more and more obviously throughout his life, and intensified at the time of his ordination."

Father Hannon's funeral Mass at his home parish in Watertown was a testimony to the esteem of bishops, priest classmates and friends; and the people he served over 53 years.

The church was filled, actually overflowing, with friends and parishioners, two busloads of whom had come to Watertown from Hanson.