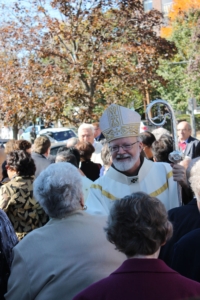 'The following day, I went to St. John's in Quincy to join them for the celebration of their 150th anniversary.' Pilot photo/CardinalSeansBlog.org

On Thursday (10/17) I was pleased to attend Mary Immaculate Health Care's 2013 Evening of Sharing and Caring. I was asked to give the keynote talk. This is an institution that was founded by the Grey Nuns and a number of them were there. The Sisters were honored for 140 years of service to the City of Lawrence. During the evening, they honored Bridget Shaheen, who is the executive director of Lazarus House, which is a facility for homeless people.

That evening (10/18), we had the White Mass and dinner for the Guild of Saint Luke, the organization of Catholic physicians, at St. John's seminary. Doctor John Baravecchio is the new president of the Guild. Past-president Doctor Helen Jackson is still very involved, but she now serves as treasurer. We were very happy to be joined by many medical students for the gathering. Mother Olga Yaqob delivered the evening's keynote address, talking about her experiences in Baghdad during the conflicts there. They also presented the Guild's St. Martin de Porres Award to Father George Salzmann, the Harvard Graduate and Professional schools chaplain.

Saturday morning (10/19) we had our annual Altar Server Appreciation Mass. Among the awards given where the Pope John Paul II and the Blessed Mother Teresa awards for outstanding service. In my homily, I told them how much being an altar server had been an important part of my life and I thanked them for the service that they are giving to the Church, witnessing to their faith by being a part of this mission. It is always a very beautiful event. Afterwards, they had make-your-own ice cream sundaes for the young people next door at Cathedral High School.

Then in the afternoon, I joined in the celebration of the 60th anniversary of St. Martha Parish in Plainville. At the end of Mass the pastor, Father Bill Schmidt, told me that a young boy in the parish had asked him what he was going to give the Cardinal. And Father Schmidt asked him, "Do you think we should give him something?" And the boy answered, "Well, we did when he came for the 50th anniversary." So Father Schmidt asked him what gift the parish gave me and the boy said, "We gave him the keys to the city, and I presented them!" He apparently even had a picture of himself as a young lad presenting me the keys to the city. Well, this time they didn't give me the keys to the city, but they did give me a present of some locally produced books.

The following day, I went to St. John's in Quincy to join them for the celebration of their 150th anniversary. It is a very beautiful and historic church. Father Robert Cullen is the pastor there. There were many priests with connections to the parish who joined us for the celebration.

That night (10/23), I gathered with the Order of Malta for Mass followed by a dinner. At the dinner, Sheila and Joe Feitelberg received the Bishop Fitzpatrick Award for outstanding service to and advancing the mission of the Order of Malta. Joe and Sheila are very generous in serving the community in so many different ways and have a long association with the Order of Malta. That evening the order also provided grants to organizations for their work including Lawrence Catholic Academy, where the Order of Malta has helped underwrite a pre-school program. Father Paul O'Brien accepted the donation on behalf of the academy.