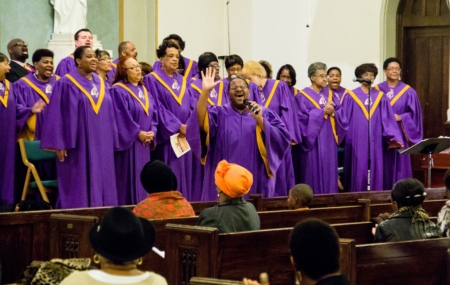 BOSTON -- At the final prayer service of the 18th annual Boston Black Catholic Revival, held Oct. 25-Oct. 27, Father Maurice J. Nutt, CSsR, said the Church faces evil in the world in the same way the disciples faced an evil spirit in a boy recounted in St. Mark's Gospel, and the only way to drive it out is to turn to Jesus Christ.

The reading of Mark 9: 22-29 that night emphasized the revival theme "Faith That Conquers Anything." In the passage, the disciples fail to drive out an unclean spirit possessing a boy brought to them by his father, but Jesus succeeds. Father Nutt compared the boy the disciples tried to help with the world the Church tries to help today.

"Collectively we have not succeeded in getting the demon out of the boy," he said.

The Archdiocese of Boston's Office for Black Catholics welcomed over 200 hundred guests to St. Katherine Drexel Parish in Dorchester and St. Angela Merici Parish in Mattapan that weekend for the revival.

"Stay with me church," Father Nutt said, because he still had a message of hope to proclaim.

Organizers said the revival provided people of all ages an opportunity to grow in their faith with three days of prayer, worship, song and preaching. This year the revival included a night devoted to the youth in the Catholic community, which attracted about 130 participants to St. Angela Merici Oct. 26.

Father Nutt spoke each night about how the message of the Gospel can come into the personal life of an individual, and finished with the theme "You Need a Hook Up" for the Sunday night prayer service at St. Katherine Drexel.

Born and raised in St. Louis, Father Nutt received nurturing to his vocation at a parish near Chicago referred to locally as the "Rock," St. Alphonsus Liguori Church.

He said the "hook up" people need to power their call to the new evangelization has to come from Jesus.

"We are desperately in need of a new infusion, a new invasion of the Holy Spirit," he said.

He said Church efforts to combat evil in the world need a revival themselves, which can only come from Jesus Christ into the people through the Holy Spirit.

"We need a new Pentecost in our Church. That is what your popes have been trying to tell you, when they say new evangelization," Father Nutt said.

Father Nutt said, through the revival, each person there had been hooked up with a bolstering of faith to go forth and live the Gospel.

Director of the Office of Black Catholics Lorna DesRoses said Father Nutt, who currently teaches preaching at the Institute for Black Catholic Studies at Xavier University in New Orleans, connected in a potent way with the young people who came for the youth revival from parishes from neighborhoods in Cambridge and Boston.

"He talked about the relationship between Peter and Jesus. He said no matter what Peter went through, Peter denying him, but yet Jesus called him to be and do something even greater than Peter himself probably would have ever imagined. He encouraged the young people to consider that when they are going through their difficulties, and to know that no matter what, Jesus is their champion. Jesus wants them to be something better and greater than they, even themselves, can aspire to," she said.

She said the idea of revival is to create a sense of a beginning, or an impetus to move forward in mission in contexts like the new evangelization.

"The three day revival was not simply a beginning and then, OK the third day, that's the end. But, this is the beginning," she said.

She said she hoped that people take the spirit of revival into their lives, their communities, and their parishes.

Father Michael C. Harrington, director of the Office for Outreach and Cultural Diversity, said the revival on a pastoral level must be a kind of recharge for those who attended.

"This is part of what we are as a Church, evangelizing. First we have to revive those who are in our pews already. We need to give them support, and strength, and encouragement, and maybe a little bit of inspiration to get out there and evangelize. That's what a revival is about," he said.

"Just take the term itself, 'revive.' We need to revive the faithful who are in our midst," Father Harrington said.