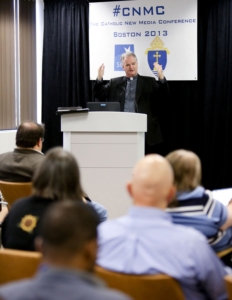 BRAINTREE -- The secretary of the Pontifical Council for Social Communications, Msgr. Paul Tighe, told guests at the 6th annual Catholic New Media Conference, Oct. 19 and 20, the Church must push outreach like the New Evangelization into what he described as the "digital continent."

"The digital is real," he said.

Msgr. Tighe delivered the keynote address at the first day of the conference at the Pastoral Center in Braintree, organized by the Catholic Media Secretariat of the Archdiocese of Boston in collaboration with the Catholic new media network Star Quest Production Network, SQPN.com.

In his remarks, he discussed the internal response by some senior people at the Vatican to the initial papal foray into massive-scale social media like Twitter.

"They seemed to think Twitter was something we had invented to expose the pope to ridicule," he said.

Despite some of the negative -- and sometimes crude or offensive -- responses to "tweets" from the papal Twitter account @Pontifex, Msgr. Tighe said the council soldiered on in the effort to establish that particular new media presence because, as people frequent that digital space, the Church and the pope have an opportunity if not an obligation to try to reach them.

"What is happening in the digital arena is very real. Increasing numbers of people are spending significant points of their life engaged with social media. It's an existential dimension of their lives, and if the Church isn't present, we're going to be absent from their lives," Msgr. Tighe said.

Bringing experience from his position as director of public affairs for the Archdiocese of Dublin, Msgr. Tighe saw the need to assert the papal presence in what has become known as the "Twittersphere" during the papacy of Pope Benedict XVI, but also through the papal transition and into the new papacy.

"The way @Pontifex closed down the tweets as the pope stepped down was very much what was happening, was a digital realization of what was happening. It was reflecting the played out reality we were witnessing in front of us," Msgr. Tighe said.

During the papal transition, Twitter account removed the image of the pope and replaced it with the coat of arms representing "sede vacante" (the "vacant seat" of the Chair of St. Peter) and the generic handle @Pontifex prevented the Vatican from having to let go of two million followers or reposition the entire initiative.

He said one of the most potent results of joining Twitter came in September when Pope Francis put out the call to pray for peace in Syria. The pope reached out using what has become known as a hashtag -- a word or short phrase with a pound symbol in front of it and no spaces.

He also spoke about more traditional web presences held by the Vatican, at websites such as www.vatican.va, and the philosophy of adapting the Church to the changing media landscape.

Msgr. Tighe also spoke about how the Vatican hired a developer to create The Pope App -- which lets users follow the pope live and for some events in real-time.

"You can see what's happening during an audience. You can watch events live. It's, one person facetiously put it, the pope in your pocket," he said.

"This pope is in nobody's pocket, but it's a way of allowing accessibility. Now that we have a pope that is exciting public interest, it's a way of making sure what he is doing is available to people," Msgr. Tighe said.

Msgr. Tighe also took questions from the audience, before ending his presentation. Questions centered on the spontaneous nature of communication on new media platforms like Twitter and Facebook.

He said people generate more than just posts, tweets, photos and blogs as they navigate the web and social media.

Addressing the concerns raised when dealing with new media users who disagree with the positions of the Church, he urged Catholics to engage, but not attack, and to promote a culture of civil communication and debate.

"Correct for the sake of the other, not to win the argument," he said.

After the keynote, he joined other conference participants in attending breakout sessions and panels, which covered topics such as internet audio and video production, writing for blogs and websites, photography and the latest trends in mobile communication. One track of breakout sessions focused on communication lessons from Pope Francis and new media in the New Evangelization.

Participants seemed energized by the conference. Many of them spent a good portion of the day on their mobile devices. Some were updating their social media accounts with news of the conference.

Jeff Young, who helped organize the event with SQPN, said the presence of the high-level Vatican representative testified to the importance of such conferences.

"It encouraged us to know that the Vatican listens, and that what we're doing here -- a lot of times on a very small level -- speaks volumes, and that people are listening," Young said.

Stephanie Kelliker, a youth minister and communications coordinator from Lexington said that she came to the conference because her parish collaborative is looking for ways to engage parishioners who are registered but not actively participating in parish activities.

She learned from the conference that new media provides "endless possibilities," she said.

Adrianna Purtell, from the Diocese of Albany, N.Y., said that she more clearly understands that being an online missionary means being authentic. Her online portrait should show her personality and her likes -- both secular and religious. She felt encouraged to strive to show a person in love with Jesus Christ, she said.

Reports by Christine Williams contributed to this story.