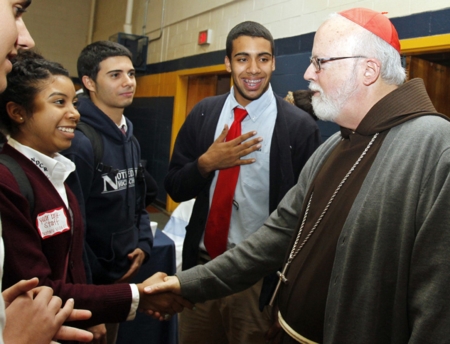 Last Wednesday (10/9) I visited Notre Dame Cristo Rey High School in Lawrence for the celebration of their 10th anniversary.

In the last 10 years Notre Dame Cristo Rey High School has graduated something like 360 students who have all gone on to college or another form of higher education. They have been such a positive force in the community of Lawrence. I still recall being with them 10 years ago to celebrate the Mass for the opening of the new school. It was mainly attended by the students, faculty and staff and was held in the school itself.

And now, 10 years later, we were in the church and it was filled; there must have been close to 1,000 people there. The Augustinian Friars, who do such a wonderful job at St. Mary of the Assumption, organized the liturgy for us. ...We are so grateful to all those who have worked to make the school the success it is, particularly Sister Mary Murphy, the principal there, who has been a moving force there since the school's inception, the Sisters of Notre Dame, the faculty and their Board of Directors. We are pleased that we have two very successful Cristo Rey schools in the archdiocese. It is a wonderful concept that is working so well for many low income families, enabling them to have a good education, and more importantly, a good Catholic education.

Thursday (10/10) I celebrated Mass to mark the 5th anniversary of our time here at the Pastoral Center. The Masses were held in our chapel, called Bethany Chapel, which we see as the heart of our Pastoral Center. One of the reasons we chose that name is that, as the Gospels tell us, Jesus had a great predilection for visiting the town of Bethany were his friends Lazarus, Mary and Martha lived. We have a lovely statue of Mary and Martha at the entrance of the Chapel and over the altar is the inscription of the words of Martha to Mary "The Master is here and is calling you". It is a great reminder that the mission of all who work in the Pastoral Center begins with prayer. We celebrated two Masses during the day, both of which I celebrated.

...Bringing all our operations the Pastoral Center from seven different venues has helped our efficiency and the sense of mission in our workers, who are able to more freely interact with people from other departments. And, of course, having the common gathering spaces of the Chapel and the cafeteria are great advantages. I expressed my thanks to Jim McDonough and Kevin Kiley particularly because they both played a very important part in the relocation from Brighton, which was certainly a great challenge! Of course I also recognized the great contribution of Tom Flatley, who donated the building to the archdiocese and we were very happy that his son, Dan Flatley, was able to be with us for the occasion.

Thursday (10/11) I also had the opportunity to meet with the Campaign for Catholic Schools Honor Roll Committee, a group of young professionals working to support our Catholic elementary schools through annual leadership giving. The committee is chaired by Chris Boland, who devotes much time and effort to strengthening our schools. I am grateful for the contributions of guidance, advice and financial support given by all committee members. To learn more about the Campaign for Catholic Schools, you can visit their website at www.campaignforcatholicschools.org.