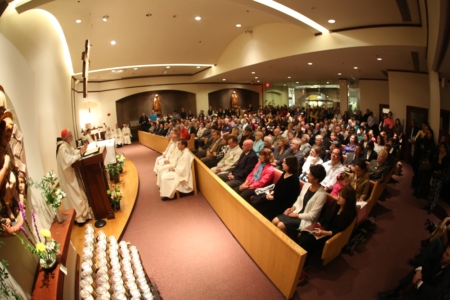 BOSTON -- Cardinal Seán P. O'Malley gave thanks for the spiritual oasis provided by St. Francis Chapel in the Prudential Center and the Oblates of the Virgin Mary who minister there at a Mass to mark the important anniversaries in the chapel's history, Oct. 12.

"The presence here of this chapel is an important witness to our Catholic faith in the very center of so much activity here in our city. So, it is a great blessing and I thank all of you for supporting the Oblates," Cardinal O'Malley said in his homily.

The Mass was held to celebrate 30 years of the Oblate's ministry at the chapel as well as the 20th anniversary of the chapel in its current location.

The cardinal said public witness can be very important when it happens in places where people might not expect it.

"Thomas a Kempis said if there was only one Mass celebrated once a year, in one place, by one priest, everyone in Christendom would spend their whole life trying to get there, to be able to attend Mass at least once during their life, but we have Mass everywhere -- even in the malls," he said.

St. Francis Chapel, located in the Prudential Center Mall, is staffed by the Oblates of the Virgin Mary and offers 36 Masses each week, with confession and prayer space offered throughout the day. The chapel also has a bookstore which offers books and DVDs as well as a variety of religious articles.

In 1947, Franciscan Friars came to Boston to build a shrine dedicated to St. Anthony, which led to the construction of St. Anthony's Shrine on Arch Street. In 1960, Boston saw the addition of the Prudential Center to the skyline, and in 1966 Cardinal Richard J. Cushing proposed an ecumenical center in the tower.

Later, the proposal evolved to have the chapel serve as a satellite to St. Anthony's Shrine, and Cardinal Cushing dedicated the original St. Francis Chapel in the Center's East Tower area in 1969.

Over time, the chapel began functioning in ministry as a community unto itself, rather than a satellite. Father David Fleming, OFM, became the first director of the fledgling chapel in 1973.

In the 1980s the Oblate community took up the ministry, because the Franciscans no longer could staff the chapel.

The original chapel was removed during renovations to the Prudential Center begun in the late 1980s, and the new St. Francis Chapel was dedicated by Cardinal Bernard F. Law on April 28, 1993.

After the Mass, Cardinal O'Malley gave remarks at a reception in Belvidere Court in the Prudential Center Mall.

On the evening after the reception, the Prudential Tower's top lit up in orange to represent the San Damiano Crucifix inside St. Francis Chapel.