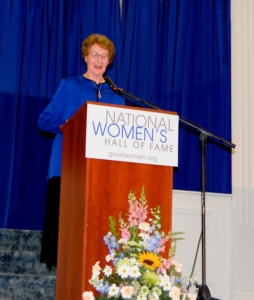 SENECA FALLS, N.Y. -- Yes, it was Columbus Day weekend, but on Oct. 12 the people of Massachusetts, especially Boston Catholics, had another reason to celebrate. That day one of their own was inducted into the National Women's Hall of Fame: Roxbury native Mary Josephine "Mollie" Rogers, later to be known as Mother Mary Joseph, foundress of the Maryknoll Sisters, the first U.S.-based congregation of Catholic women religious dedicated to foreign mission.

Several hundred people, including congresswomen, other dignitaries, family, friends and co-workers assembled for the festivities, held at the New York Chiropractic College Athletic Center in Seneca Falls, N.Y., where this year's nine inductees were honored.

About a dozen members of the family of Mother Mary Joseph, who died in 1955, attended the gathering, travelling not only from Boston but other parts of the United States to be present.

Grandnephews John and Tony Rogers used words like "overwhelmed" and "honored" to describe their own feelings, as they considered the recognition being bestowed on Mother Mary Joseph for the "good and selfless" work that she and the Maryknoll Sisters have performed for over 100 years.

"If Mother Mary Joseph Rogers were standing here today," Sister Janice said, "I believe she would say that we celebrate not only an individual or the community that she founded, but that we honor women everywhere who strive to make the world a better place for all. Such was her inclusive, worldwide vision."

Even as a child, the Maryknoll Sisters founder had a sensitivity to people in countries far distant from her own.

"From an early age, I was keenly alive to the existence of little sisters and brothers in far off lands quite different from myself in race, color and creed," she wrote of her interest in mission work in 1941.

That "open and worldwide heart," Sister Janice noted, would be echoed in her valedictory address at her graduation from Roxbury High School in 1900. Speaking on the subject of "Toleration" she quoted St. Augustine, saying, "In what is essential, unity; in what is indifferent, liberty; and in all things, charity."

Those qualities -- unity, liberty, charity -- along with an ability to find inspiration and embrace ideas from those different than herself would come to characterize the congregation she would found in 1912, Sister Janice said. The congregation is known for their ability to walk companionably beside those of different faiths and world views to achieve great things for the poor, disadvantaged, victimized, seriously ill, and under-represented in some of the most ravaged areas of the world.

Today, some 468 Maryknoll Sisters, headquartered in Ossining, N.Y., minister in 24 nations around the world, ministering to victims of human trafficking, HIV/AIDS orphans, the storm-ravaged residents of Haiti, desperately poor families needing to learn a trade or to raise and market crops, as well as speaking out on behalf of immigration and environmental concerns, the rights of women, youth issues, and much more. For additional information on Maryknoll Sisters, please visit their website: www.maryknollsisters.org.