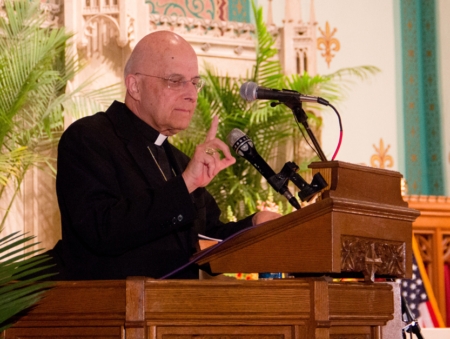 BRIGHTON -- St. John's Seminary opened the doors of the new Our Lady of the Presentation Lecture Hall and Library to their new neighbors in Oak Square, Oct. 15, for a continuing lecture series celebrating the Year of Faith and the 50th Anniversary of the Second Vatican Council.

Archbishop of Chicago Cardinal Francis George, OMI, gave his talk "Lumen Gentium and Episcopal Governance" to seminarians, priests and laypeople at the first event in the new venue.

When the cardinal took the ambo, at the newly restored building of the former Our Lady of the Presentation Church, he maintained a neighborly tone as he focused much of his talk on the role of the diocesan priest in the context of the Vatican II document "Lumen Gentium."

"The mission of the Church everywhere in every age is to introduce people and the entire world to Jesus Christ. We call the Church 'mother' and mothers introduce their children to other people," he said.

The cardinal cited the original purpose of the council as redefining the relationship between the Church and the world for the sake of a more effective mission in the world. He said he hoped to explore where episcopal and priestly authority fit into the mission.

He said that in calling the council, Pope John XXIII noted divisions -- nation against nation, race against race, and class against class -- as a context to be addressed in the modern world.

"He believed that the Church's internal unity was secure. There was no need to re-examine the deposit of faith, as councils usually did, but there was need to look at it and find new ways for the Church to exercise her mission more effectively, so that the world would find its own integral unity, not exactly the unity of the Church that we now call 'communion' since the council, but rather a solidarity -- the union of the human race," he said.

The cardinal said the unity of the Church and the unity of leaders in communion acted as a level to pursue peace in the world "Pacem In Terris" -- in the words of Pope John XXIII.

"The second Vatican Council is therefore a missionary council. It was called not directly to change the Church, so that she could catch up with a tortured world, but rather to change that world," he said.

"In this sense, Pope Paul VI returned at the very end of the council to Pope John XXIII's intention in calling it, and explained that the Church -- as the Good Samaritan of our age -- sees a wounded world, introduces it to Christ, and binds its wounds through dialogue and service," Cardinal George said.

He said the missionary intent of the council became muted in application afterward, but over time, the Church reestablished its spirituality as a kind of Good Samaritan to the world's injured traveler.

"The method is always dialogue, but the purpose is to heal the world's wounds, and through God's grace, bring the world to its own internal unity," the cardinal said.

He said the Church sought a position in the United Nations for this purpose with a focus on human rights to be protected even against the sovereignty of individual nations.

He described bishops as missionaries in the context of engaging the world.

"Bishops are missionaries because they are pastors, and the pastoral challenges always remain the same. How to be effective, how to bring people to Christ in a particular society without being seduced or compromised by the powers of the world," he said.

But, he also brought the message down to the level of local pastors and diocesan priests.

He said the identity calls a priest to help people on Christ's terms, not his own, a sanctifying way of life the cardinal called "peculiar to ordained priests," called to help people in a variety of circumstances.

He said documents from the council -- such as "Lumen Gentium" -- sought to save the Church from becoming "overly legalistic" with wording and teaching that "invites misinterpretation at times" through a reckoning with difficult circumstances in the world.

"What good pastoral practice does is to bring the principle into a situation -- so the principle is continuous, the situation is changing -- of interpreting a fidelity to the demands of discipleship," he said.

He said that speaking the truth of the Gospel has become difficult in a world where people seek approval for their actions, even when they know they run contrary to Church teachings.

He said in this context people have become disillusioned, but not with the Church.

"There are many people today who are disillusioned with the world. They have lived in it, and they find themselves trapped by it. It is a closing world, and so they come into church precisely to find a reprieve of it, and we have to be able to respond to that in such a way that shows here is where you can be free. You can truly be yourself in Christ," he said.

St. John's rector Msgr. James P. Moroney told The Pilot he saw the focus of Cardinal George's talk on relationships as valuable information for seminarians and the local residents who came for the presentation.

"I was delighted that he not only spoke this evening about the relationship of the bishop and governance, but also of the priest to his people, because those many seminarians, who were here with an equal number of people from the Brighton community, they are going to be in relationship for the rest of their life. What we do in the seminary is prepare priests to effectively reflect Christ to people," he said.