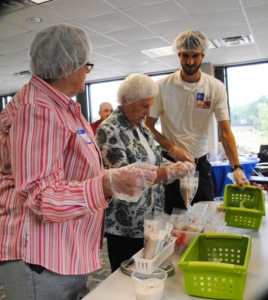 BRAINTREE -- Numerous groups that serve the Church in the world and in the archdiocese came together for the fifth annual Archdiocesan Justice Convocation at the Pastoral Center on Oct. 5, themed "Pope Francis and the Social Ministry of the Church." The gathering drew around 250 attendees this year.

To open the convocation, guests received a previously recorded video greeting from Cardinal Seán P. O'Malley -- who was in Rome for meetings with Pope Francis at the time.

"In these early months of his pontificate, Pope Francis has made clear that we are called to go out and bring the good news to all of God's children. In the Church in the United States, one of the important tasks is to turn consumers into disciples and disciple-makers," said Cardinal O'Malley.

Organizers introduced a new format this year that kept attendees together for the convocation, by forgoing breakout sessions in favor of panel discussions and extended networking opportunities.

"We can as people of faith walk through the violence and bring reconciliation, if we are committed to engaging everyone in the community, both the victims and the victimizers, to move towards restoration," Father Puopolo told The Pilot.

"The Church's whole approach to end of life, its support of palliative care, is a loving response to the suffering that individuals experience at the end of life," Cataldo said.

Oliva recently received a "consideration of deferred action" from Homeland Security, which allows children brought into the United States to become eligible for work authorization, without receiving lawful status or facing deportation.

Sister Pat said Oliva is "an exceptional young woman, and we were delighted that she told her story to the participants who were at the convocation."

Sister Pat said her own talk focused on numbers and statistics, while the reflections given by Oliva brought personal perspective on the issue.

"It made it real," Sister Pat said.

Director of formation for the Office of the Permanent Diaconate Deacon Daniel Burns said he brought the deacon candidates in formation to the convocation to explore the place of social justice in the ministry of a deacon.

"We had all of the candidates for the diaconate who are in formation come to this event because social justice is at the core of diaconal charism. As Father Bryan Hehir was speaking, he focused the Church's mission on this outreach as servant to the world, which is a kind of Vatican II message that is being reiterated by Pope Francis, and so, that was right in the wheelhouse of who the deacon is, who the deacon is called to be, which is an icon of Christ the servant in service to the world's needs. Social justice is how the Church has articulated the focus," Deacon Burns said.

Pat Dinneen, chairperson of the Archdiocesan Pastoral Council Social Justice Committee, said she appreciated the participation of the various ministries at the convocation, particularly the Sisters of St. Joseph who participated in two panels and as exhibitors during the event. The congregation was celebrating 140 years of ministry that weekend.

"A lot of us have been working a long time, but not 140 years, so it's pretty impressive. They have done some extraordinary good work," she said.

"You couldn't ask for a better pope, a better cardinal, a better community than the Archdiocese of Boston. I think Boston has been a leader in social justice, but now it's serious. We have really all got to pull together," Dinneen said.