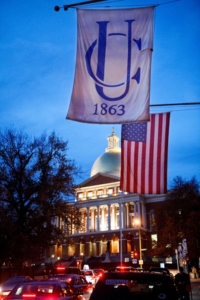 The flag of the Union Club on Beacon Hill is seen in this Pilot file photo. Cardinal Seán P. O'Malley has invited state lawmakers from districts within the Boston Archdiocese to an informal private meeting with him at the club on Oct. 17. Pilot file photo/Gregory L. Tracy

BOSTON -- Cardinal Seán P. O'Malley has invited state lawmakers whose districts lie within the Boston Archdiocese to an informal private meeting on Oct. 17 at the Union Club on Beacon Hill.

Terrence C. Donilon, a spokesman for the archdiocese, said the meeting will be the first between O'Malley and a large group of lawmakers since he became Archbishop of Boston in 2003.

"We have heard from legislators that they don't really know us, and that's understandable. It has been a rough 10 years. So, we want to take the opportunity to sit and talk to them -- talk to them about the footprint of the archdiocese, talk to them about the impact that we have in cities and towns that they represent, give them an update as to what we're doing in our social justice and schools areas, answer their questions and just keep it informal," Donilon said.

"It's about relationship building," he added.

Donilon said that, while the meeting is the first of its kind, the cardinal is in regular contact with elected officials.

"The cardinal has met with the governor, and the senate president, and the speaker. He has regular discussions and meetings with Boston mayor Thomas Menino and certain legislators who ask to come in and see him, but we have never done anything this big," he said.

He said the cardinal has reached a point recently where his schedule allows more of a focus on these kinds of informal connections, such as the one with Governor Deval Patrick that Donilon said led to the Cathedral of the Holy Cross hosting an interfaith prayer service as Boston reacted to the bombings at the Boston Marathon.

"He has just been swamped with his duties, as both a cardinal running a diocese, and trying to rebuild the archdiocese. So we are at a point now where we can have these kind of discussions and then try to build relationships," he said.

"We are in 144 cities and towns in Massachusetts, represented by a lot of good men and women in the legislature, and they deserve to know what the Church is doing," Donilon added.

According to an invitation sent to legislators who represent districts within the Boston Archdiocese, the lawmakers will hear from representatives of the Massachusetts Catholic Conference, the Archdiocesan Catholic Schools Office, Catholic Charities and related organizations.

"Relationships. They matter. The archdiocese has a huge footprint. If we were to go away tomorrow, there would be a couple hundred thousand people that Catholic Charities would not be able to serve, and they would fall on the backs of cities and towns. If we closed all our schools tomorrow, there would be 42,000 kids that would have to be educated by public schools or private schools," he said.

Donilon also pointed to the benefits of establishing connections with lawmakers for the future.

"We are embedded in the communities. It is a good thing that they get to know us. If there is mutual interest on things that we can work on, then that's good. We can go forward," he said.