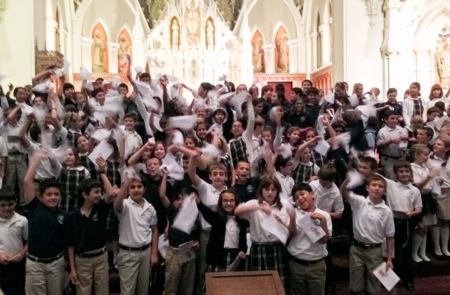 SOUTH END -- Over 425 Catholic school children and children from homeschooling families of the Archdiocese of Boston gathered at The Cathedral of the Holy Cross, Oct. 4, for the Eighth Annual Children's Eucharistic Holy Hour sponsored by the World Apostolate of Fatima in Boston.

This annual event, founded 10 years ago by the World Apostolate of Fatima-USA and celebrated on the first Friday of October each year, has inspired the gathering of tens of thousands of children around the world each year before the Blessed Sacrament to pray for peace in the world and in families primarily through the recitation of the Rosary and led by the children.

The celebration took on special meaning this year, as on Oct. 13 in Rome, Pope Francis was to consecrate the world to the Immaculate Heart of Mary in the presence of the original statute of Our Lady of Fatima, gifted to the Sanctuary of Fatima in 1920 shortly after the apparition.

The crown of this original statute now holds the bullet that struck then-Pope John Paul II on May 13, 1981 during an assassination-attempt.