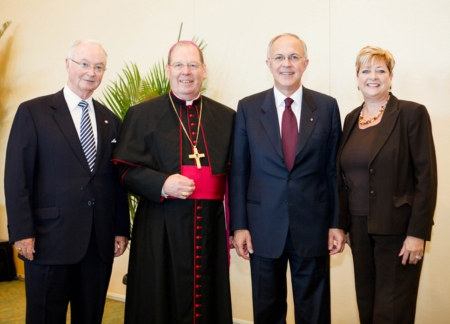 SOUTH END -- Even though today's society is suspicious of authority, especially religious authority, Pope Francis' loving witness has attracted millions around the world, said Carl Anderson, supreme knight of the Knights of Columbus.

The power of personal witness resonates with people, he added, speaking at the luncheon following the annual Red Mass, held at the Cathedral of the Holy Cross in Boston on Sept. 29. He urged the room full of lawyers and other legal professionals at the Seaport Boston Hotel to make their lives cohesive so that they too will testify to love.

"The Holy Father's witness should inspire us to witness -- in our public and professional lives -- Christian love for every person," he said.

Anderson stressed that Pope Francis' message is not radically different from his predecessors -- that he understands that it is love grounded in truth which endures.

In his first encyclical, "Lumen Fidei," Pope Francis wrote, "Love and truth are inseparable. Without love, truth becomes cold, impersonal and oppressive for people's day-to-day lives. The truth we seek, the truth that gives meaning to our journey through life, enlightens us whenever we are touched by love."

Anderson said that the truth about love is what motivates Catholics to be good Samaritans. It is why the Church participates in so much charitable work that assists the hungry, the sick, the elderly and the poor.

"The same truth about love compels us to work to protect the unborn, the terminally ill, and the institution of marriage and family," he added.

But many in society want people to keep faith and public life separate, he said.

"The prevailing trend in society is a tendency to compartmentalize our lives. Religious belief is tolerable so long as what happens in church stays in church," he added.

Anderson called on the legal professionals to help build an America which respects the rights of conscience of every person, regardless of their belief. When it comes to matters of conscience, there can be no meaningful distinction between public and private life, he said.

Anderson added that the people of Boston are well equipped to face these challenges. He recalled the "Boston Strong" slogan that has been used since the bombing at this year's marathon as well as the many challenges faced by the Archdiocese of Boston.

"Members must have a thorough understanding of Church teaching, not just to defend them in the public square but to promote the broad social justice agenda for the benefit of all," he said.

In order to assist them, the guild has established two new committees. The first will examine the guild's governance, and the second will seek to better meet members' spiritual, educational and personal needs.

Longtime member Fran Hogan praised the lawyers' guild for its continued service to its members. She said at the luncheon, "It's not easy being a Catholic and a lawyer and holding up your principles. This is a chance to gather together and support each other."