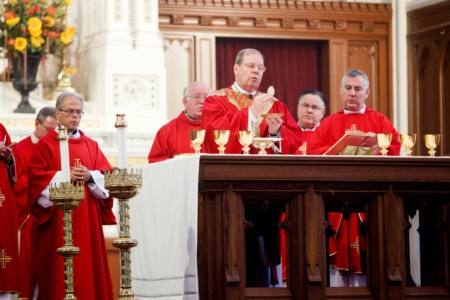 Vicar general Bishop Robert P. Deeley celebrates the Red Mass for those in the legal profession Sept. 29 at the Cathedral of the Holy Cross. Pilot photo/Gregory L. Tracy

SOUTH END -- At this year's Red Mass for legal professionals, Boston Catholic Lawyers Guild members paid tribute to Justice Joseph Nolan, former Massachusetts Supreme Judicial Court judge and president of the guild for 25 years, until his death this spring. The Mass was held at the Cathedral of the Holy Cross in Boston on Sept. 29.

"There is an empty seat in our cathedral and an empty place in our hearts," said celebrant Bishop Robert Deeley during the homily.

Bishop Deeley said that the loss of Nolan has been felt by the judge's family, the lawyers' guild and the bishop personally. Bishop Deeley previously served as the guild's spiritual director and knew Nolan well. He praised Nolan's "unfailing cheer," hope and love for the Catholic Church.

In a statement after Nolan's death on April 23, Cardinal Seán P. O'Malley said that the justice was guided -- in his personal life and professional life -- by his moral beliefs, including the sanctity of all human life.

"He balanced his secular life with his prayerful commitment to Christ and the Church," he said.

Cardinal O'Malley did not attend the Red Mass this year because he was traveling to Rome.

Nolan, of Belmont, left behind his wife, 7 children, 24 grandchildren and 16 great-grandchildren. One daughter, Maura Nolan Brown, has accompanied her father to the Red Mass for years and came this year as well.

"This guild meant a lot to him," Brown told The Pilot after the Mass. "It was hard not to see him there."

Brown said she became emotional when Bishop Deeley spoke so highly of her father. She praised her father's deep faith, a faith that brought him to Mass every day even as his health was failing at the end of his life. Though he needed a walker to get around and required oxygen, Judge Nolan continued to be a daily communicant.

"He was one of the most devout Catholics I have ever known," said Michael Gillis, lawyer and member of the guild. "There would be no guild without Judge Nolan."

The Red Mass -- a tradition that dates back to the Middle Ages -- is held to invoke the power of the Holy Spirit in guiding members of the legal profession before the beginning of the judicial year. The Mass takes its name from the red vestments traditionally worn by clergy to represent the Holy Spirit.

In his homily, Bishop Deeley asked for God's blessing upon all those who work in the administration of justice. The crowd included lawyers, court clerks and others who work in the legal profession.

The scripture readings demonstrated the importance of seeking justice and cautioned against indifference. In particular, Luke's Gospel account of Lazarus and the rich man showed the danger of thinking only of oneself and one's own needs. Even after death, the rich man thinks of his torment and asks Abraham to send Lazarus to fetch him water, the bishop said.

"To the rich man, Lazarus is still a servant," he said. "His arrogance follows him beyond the grave."

Bishop Deeley said that those who serve God must do so in a culture that can focus on self-interest at the cost of the common good.

"It is a culture which challenges the value of faith and, in its self-centeredness, the value of human life and true human relationships. It can involve itself in an endless chase after empty fads and immediate pleasures," he said.

He asked God to give those gathered the courage to be hopeful and authentic in doing what their faith asks of them.

"By so doing, we will witness to the truth which is Jesus Christ, who is the bearer of God's love, and we will change the world we live in as we faithfully pursue justice," he concluded.