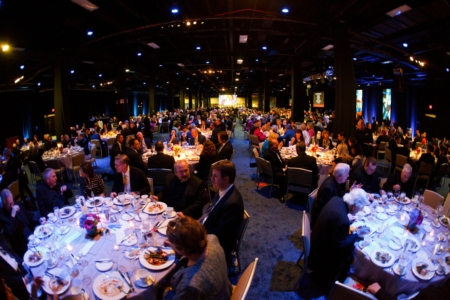 More than 1,450 people attended the 5th annual Celebration of the Priesthood Dinner held at Seaport World Trade Center in Boston Sept. 26. The event raised over $1.475 million to support the Archdiocese of Boston's Clergy Funds, which support the medical needs of active and retired priests, the priest pension fund and the Regina Cleri residence for retired priests. Pilot photo/Gregory L. Tracy

Nearly 1,500 people came together to support the needs of the priests of the Archdiocese of Boston at the fifth annual Celebration of the Priesthood Dinner held at Seaport World Trade Center in Boston Sept. 26.

The annual gala dinner is the premier fundraising event for the Archdiocese of Boston's Clergy Funds. The funds support the medical needs of active and retired priests, the priest pension fund and the Regina Cleri residence for retired priests. The event raised over $1.475 million to support the fund, surpassing the goal by 16 percent.

When the dinner was launched in 2008, the Clergy Funds were operating at multi-million dollar annual deficits but are currently reporting a surplus. During the evening it was announced that with the fiscal health of the fund stabilized, the Clergy Funds group will now focus on a new program aimed at improving the physical, emotional, mental and spiritual health of the priests of the archdiocese.

Father Robert Reed, the president of the CatholicTV network and interim CEO of iCatholic Media, served as the evening's host and emcee.

"We come here, all of us tonight, faithful people and faithful priests, with tremendous gratitude in our hearts. Thank you for your presence and personal commitment to Boston's priests," he said.

In his introductory remarks, Father Reed spoke about the gift of the priesthood and his own joy at being a priest.

"I must say that one of the most fortunate things that has happened to me in life is when I began to listen to the call of God in my heart to the priesthood. I love being a priest," he said.

The evening's speaking program began with remarks by Cardinal Seán P O'Malley who said he would be departing for Rome before the end of the event. Cardinal O'Malley is part of the group of seven other cardinals charged by Pope Francis with advising him on reform of the Roman Curia.

In his address, the cardinal spoke of the Church as a family and the role of the priest as "father" of that family.

"We see how mothers and fathers in families make great sacrifices to assure the well-being of their children, taking on extra jobs, often forgoing personal ambitions and professional opportunities in order to meet the needs of their families. Our priests also make many sacrifices for their people, as they live out their vocation to be a sign of God's love for others," he said.

"Each of us, I am sure, has been touched, shaped and influenced by priests who have been part of our lives, most often the parish priests, who are truly spiritual fathers and shepherds according to Jesus's own heart," the cardinal said.

But, Cardinal O'Malley said, in order to be able to continue playing that important role, priests need "ongoing support, to stay strong in a lifelong formation."

Announcing that a new "comprehensive wellness program" for priests will launch next month, the cardinal said, "We will all benefit from this well informed and proactive approach to caring for our priests, who we are counting on to be present and to walk with us through the many moments of our lives."

Before concluding with the blessing of the meal, the cardinal asked priests celebrating 5, 10, 25 and 50 years of ordination to stand and be recognized by those in attendance.

Following the dinner service, the evening's program continued with remarks by the chairman of the board of the Clergy Funds, John Kaneb.

Kaneb described the five-year financial turnaround of the funds, saying that it was achieved through implementing "business efficiencies." He credited Clergy Funds director Joe D'Arrigo and staff as well as the cooperation of the priests of the archdiocese for the accomplishment.

But Kaneb said the work of the Clergy Funds is not finished and stressed the importance of the new wellness initiative.

He said that, at age 78, he is a contemporary of many of the senior priests of the archdiocese and compared the support system in his life to theirs.

"I have a lot of support built into my life, but what about my contemporaries, the retired priests of the Archdiocese of Boston? They do not have a wife, they do not have children, do not have grandchildren," said.

"Frankly, that is Clergy Funds' next mission -- support outside of our legal obligations to pay their healthcare bills or pay their pensions or keep Regina Cleri going. Support for the whole person," he said.

Kaneb concluded his remarks with an appeal for increased support of the Clergy Funds saying, "We cannot do this next step on business efficiencies."

Kaneb was followed at the podium by dinner co-chairs Michael and Janet Daley. After introducing his wife, Michael Daley continued with his remarks.

Daley reported the event's fundraising success and thanked all the committees and the staff that made the evening possible.

He said he and his wife felt "appreciative and humbled" to chair the dinner but that they took on the challenge in honor of the late Msgr. Paul Moritz, a priest they had known for 60 of the 68 years of his ordained ministry.

"He is the reason we volunteered to undertake chairing this event, as a tribute to him and in thanksgiving for his guidance, spirituality and support in our lives. Thank you Father Paul and God bless you and this one's for you," Daley said.

This year, the ministries of three priests in their role as "first responders" were featured at the dinner. A video presentation highlighted the work of Boston Police Dept. chaplain Father Sean Connor and his work following the 2013 Boston Marathon bombings; Logan Airport chaplain Father Richard Uftring who was on duty during the terrorist attacks of Sept. 11, 2001; and senior priest Father Arthur Calter, who served as a chaplain to troops in combat during the Vietnam War.

In his keynote speech, Boston Police Superintendent William B. Evans took up the theme of a priest as first responder.

Evans, third in command of the Boston Police Dept., responded to the Marathon Bombings less than an hour after running the race himself and spearheaded the Watertown manhunt that led to the apprehension of the second bombing suspect, Dzhokhar Tsarnaev.

Evans described what began as a typical upbringing in South Boston, living in the second floor of a triple decker with his five brothers and his parents. But tragedy struck early in his life. His mother passed away when he was 3 years old, his brother Joe was killed in an accident when Evans was 9 years old and his father passed away when he was 14, leaving him in the care of his brothers.

"The first responder my life was Father Paul White. Throughout all those tragedies, Father White was at the table with us. He got us through those tragedies," Evans said.

Evans said that perhaps the greatest impact came when he was a freshman at South Boston High School and Father White came to his brothers saying he was "worried about William" who was always "hanging out on the corner" and offered to help him attend St. Sebastian's School in Needham.

Evans said that, despite the challenge of travelling the great distance to the school each day, the Christian values and education he received at St. Sebastian's transformed his life and put him on the path to where he is today.

"The education has been tremendous, and is tremendous there and I owe my success to it," he said.

The evening concluded with a closing prayer and benediction delivered by Msgr. Paul McManus, a priest for 71 years.