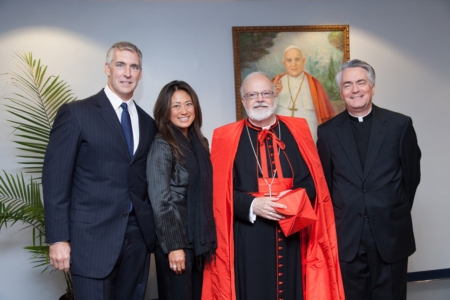 WESTON -- Despite coming to his second vocation at the age of 58, seminarian Kevin Hickey said he approached it with the faith of a little child.

"What we want and what God wants of us is not always the same. Sometimes you've got to take that leap of faith. It's like the child standing on the pool's edge with the daddy in the water," he said. "Sometimes we have to have that same trust in God."

Hickey is one of five men studying at Blessed John XXIII National Seminary in Weston who will be ordained for the Archdiocese of Boston next spring. He spoke about his vocation at the seminary's annual Lawn Party Sept. 25. This year, the fundraising dinner attracted nearly 400 people, the most who have ever attended. Alumni came from as far away as Denver and Orlando.

"I'm so pleased to see so many people here to support this annual effort," former seminary rector Bishop Peter Uglietto told The Pilot. He said that he saw many people who have long supported the seminary as well as many new faces too.

Seminarian Hickey told the crowd that his first vocation was marriage, to his wife of 20 years. He spoke with obvious affection about her and her deep faith. Their first activity as a married couple was to attend Saturday Vigil Mass together after their wedding reception. They left for their honeymoon early the next day, and the first question his wife asked at the hotel when they arrived was where to find the nearest Catholic church. She was diagnosed with breast cancer at age 36 and passed away seven years later in 1999.

After she died, Hickey became more involved at his parish. He actually thought about entering the seminary, but said, "I thought my time had come and gone." His parish priest knew otherwise and approached Hickey about becoming a priest. Hickey applied to Blessed John and was accepted.

Hickey said that without Cardinal Richard Cushing's vision in founding the seminary and the support of people like the attendees at the Lawn Party, he and his fellow seminarians may never have found their delayed vocation and the Catholic Church would be poorer for it.

Blessed John is the only seminary in the United States administered by diocesan priests that trains men over 30 for the priesthood. The seminary has over 600 alumni and will celebrate its 50th anniversary next year.

The seminary's rector for the past four years, Father William Palardy, said that it is up to Blessed John's community to continue its good work for the next 50 years. The school recently began its first-ever capital campaign. The money will be used to renovate the chapel, build the endowment and create a new learning center. The center would include a new, upgraded library and would also allow the seminary to increase enrollment by making space for 12 new rooms for seminarians.

Scott Gieselman, the Lawn Party chair, said that Blessed John has an "incredibly important mission." Seminarians bring their talents and experience from the secular world to their vocations in the priesthood. They will someday serve Catholics across the country at baptisms, weddings and funerals -- in their joyful moments and trying times.

He added that the seminary staff and students are like an "extended family."

"It is a credit to all the people and all the good work that goes on here," he said.

Seminarian Anthony Bittar, a second-year seminarian for the Archdiocese of Denver and the Archdiocese for the Military Services, agreed that the seminary community is like a family and is particularly close knit when it comes to the "brother seminarians."

Bittar is a captain in the military and served for 10 years, including a 12-month tour in Iraq. The entire time he spent in Iraq, Bittar never saw a priest, he said, adding that he wants to serve deployed soldiers.

At the time of the dinner, it was widely expected that the Vatican would shortly announce a 2014 canonization date for Blessed John XXIII.

In his remarks, Cardinal Seán P. O'Malley jokingly thanked Father Palardy for arranging that canonization to coincide with the 50th anniversary of the Weston seminary.

The cardinal also praised the rector for his dedication and all the people who enable the seminary to do its unique work.

"A vocation can come at any moment in our life," he said. "That is what Pope John Seminary is all about."