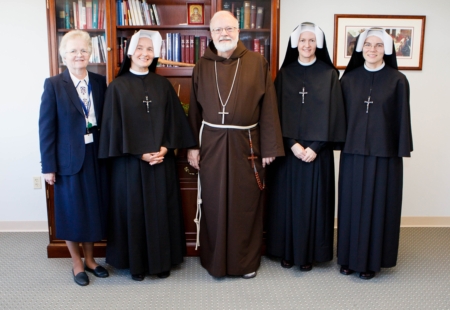 'Monday (9/23), I was visited by the superior of the Sisters of Divine Mercy, who are at St. Ann's in Neponset. They told me of their plans to open up a retreat center in the archdiocese.' Pilot photo/CardinalSeansBlog.org

Sunday (9/22) I Joined Our Lady of Grace Parish in Chelsea for the celebration of their 100th anniversary. It was a bilingual celebration because there is a very large Haitian community there. There were a number of priests connected to the parish concelebrating, including a number of Redemptorist and Jesuit fathers. After the Mass, Father Jim Barry had us all go out to the parking lot next to the church to take a picture of the whole parish.

From there I went to St. Theresa of Avila in West Roxbury for the Mass and reception to celebrate the 50th anniversary of Father Raymond Helmick's ordination. Father Raymond is, of course, the brother of the pastor, Msgr. William Helmick. We arrived towards the end of the celebration and were able to spend some time with him. His presence in the parish for so long has been very significant. The large turnout at the Mass is an indication of how much the people in the parish love him. One external manifestation of his contribution to the parish has been the contribution of his artistic talents. He created the parish's tabernacle and some very stunning mosaics that are in the church.

In the afternoon (9/23), I hosted one of our periodic gatherings with priests ordained within the last five years. We always begin our meeting with a holy hour followed by a time of conversation and dinner.

Among the topics we discussed was the Holy Father's recent interview with Civilta Cattolica. The priests had some interesting insights into the Holy Father's comments and it was a very lively discussion. There were a wide range of comments that got the priests to reflect and also to talk about how they were personally reacting to the words of the Holy Father.

We also discussed my upcoming meeting with the Holy Father. I told them that after this first meeting next week, we will have a better sense of exactly what the Holy Father is hoping for from this group. Certainly, a number of topics have come forward. As I have mentioned before, I have been reaching out to my brother cardinals and bishops in the United States and Canada and, in addition, some other religious and lay people have contacted me. I will certainly be taking into account all the recommendations I have heard. This is an ongoing process and the Holy Father is seeking input from throughout the worldwide Church. One meeting is not going to change everything in the Church, but it will be a start. Certainly, the first order of business will be trying to see what could make the Curia more effective in the service of the Holy Father and the dioceses around the world.

That evening we had the meeting of our Archdiocesan Pastoral Council. We had a very interesting presentation on pastoral planning and there were a number of questions from the Council members. We then heard reports from the members of the various subcommittees. The last subcommittee report was by Sister Pat Deneen, who spoke about the upcoming Archdiocesan Social Justice Convocation, which will be held Oct. 5 here at the Pastoral Center.

Wednesday (9/25), I went to Our Lady Help of Christians in Newton to celebrate a Mass for Mission Education Day that was being held there with students from our Catholic schools and parish religious education programs. World Mission Day is a program of the Missionary Childhood Association that introduces children to the missionary work of the Church and gives them ideas about how they can help support the missions in their schools and parishes. The children heard talks by Sister Rosemary Hayes, SHCJ and Father Pat Byrne, SVD.