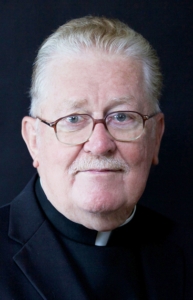 A Somerville native and one of the three children of the late Timothy and Margaret Murphy, Father Timothy Murphy was granted senior priest/retirement status on June 4. His parents and his brother Jeremiah are deceased; his remaining sibling is his sister Maureen Sheehan.

Born in Somerville on Aug. 12, 1937, he attended local public schools through grade six and spent grades seven and eight at St. Joseph School, Medford. After his graduation from Boston College High School, he attended Boston College as a member of the Class of 1959; he transferred across the street to St. John's Seminary and entered the class of 1963. Auxiliary Bishop Thomas Riley ordained him to the priesthood at St. Agnes Church in Arlington on Feb. 2, 1963. His class was so large that Cardinal Cushing scheduled five ordination Masses across the archdiocese -- one on Feb. 1 in Gloucester; and four others on Feb. 2; part of the reason for the Feb. 1 date was that there were not enough auxiliary bishops at the time to have ceremonies on the same day!

Following ordination Father Murphy was assigned as an assistant at St. Jerome Parish in Weymouth; three years later he was assigned as an assistant at St. Anthony of Padua Parish in Boston's Allston section. For almost the next 30 years he would serve in the Hub in Allston as an assistant (1966-1977); then as an associate at St. Angela Merici in Mattapan (1977-1979) and from 1979 to 1995 as pastor of the parish. Father Kevin Toomey, pastor of St. Raphael in Medford served as deacon at the Mattapan parish while Father Murphy was there, "Tim is a great guy and he was good example for me during my deacon year. We had a great house of priests."

In 1995 Father Murphy enjoyed a Sabbatical program at the Pontifical North American College at Rome; on his return to the archdiocese, Cardinal Law named him pastor of the archdiocese's second oldest parish, Immaculate Conception in Salem.

On his departure from Mattapan, a Boston Globe article dubbed him "activist priest." The article really tells of an active priest much involved in all aspects of his people's lives. About all his assignments Father Murphy said "I have enjoyed each one of them." Perhaps that simply can be traced to his conviction that he has been and remains "always happy as a priest."

The topic of vocation naturally comes to the fore and Father Murphy explains that he was encouraged and supported in his vocation by his parents and family by their faith and prayers; but also by the good example of the priests of his home parish, St. Polycarp, Somerville and especially its pastor during his youth, Msgr. Thomas Garrity. He offers a simple suggestion to any young man considering a vocation -- "pray to know God's will and talk to a priest."

Having been an "activist" priest for so many years, Father Murphy looks forward to continuing his priestly ministry and will live in residence at St. Mary of the Annunciation just outside of Central Square in Cambridge.