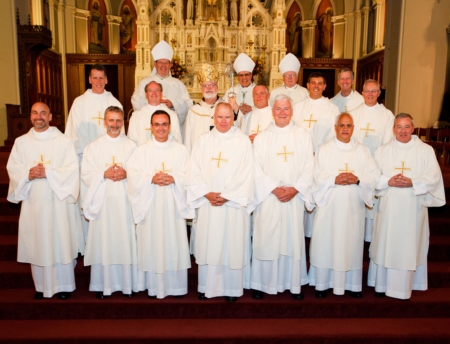 SOUTH END -- At the ordination Mass of 12 new permanent deacons at the Cathedral of the Holy Cross, Sept. 21, Cardinal Seán P. O'Malley described their ministry in terms of the ministry of Pope Francis.

"The deacon has got a special call to be a bridge builder, a peacemaker, an artisan of community -- revealing the merciful face of the Lord to those who are suffering, weak and forgotten," the cardinal said.

In his homily, the cardinal referred to a July trip Pope Francis made to the Italian island of Lampedusa.

"He says, I feel like that sinner on whom the Lord has turned his gaze. Each of has our own conversion or vocation story, some dramatic, some rather pedestrian. The fact is: Jesus has turned his gaze on each of us, and has invited us to follow him as his disciples," Cardinal O'Malley said.

The deacon, from the Greek "diakonos," meaning servant or minister, is the first of three ranks of ordained ministry in the Church. Among the many functions they perform in parishes, deacons may preside at baptisms, weddings and rites of Christian burial, assist the priest at Mass, proclaim the Gospel and deliver homilies. In addition to a parish assignment, each of the new deacons will also assist in one of the permanent ministries of the archdiocese.

The first Boston deacons were ordained in 1976, with new classes being ordained every two years. In 2011, the archdiocese began ordaining permanent deacons annually.

The Rite of Ordination to the Order of Deacon began during the Liturgy of the Word. After the Gospel reading, the men to be ordained were called forward and elected by the cardinal.

Cardinal O'Malley then delivered his homily, followed by an examination of each man in a series of questions. The men promised respect and obedience to the cardinal and his successors, to show their future and present loyalty to the bishop as leader of the archdiocese.

To signify humble submission before God, the men lay prostrate in the sanctuary while the assembly sang the Litany of Saints.

The deacons' wives then presented a stole and dalmatic -- which signify the office of diaconate and the deacon's role in the celebration of the Eucharist -- to a priest or deacon who vested their husbands. Next, the deacons were presented with the Book of the Gospels.

The Rite of Ordination concluded with the kiss of peace given by Cardinal O'Malley, auxiliary bishops, and all the permanent deacons present.

The deacons' wives brought the gifts to the altar, and the Mass continued with the newly ordained deacons standing at the altar for the first time.

Speaking after the Mass, Deacon William Jackson said his years working as a court reporter, transcribing in the court system, inspired him to consider a vocation as a deacon.

"I didn't want to transcribe anymore; I wanted to help them, so I pursued the call to diaconate," he said.

"God was calling me through the court system, through all the brokenness. I answered yes," he added.

Deacon Jackson is the only one of the 12 new ordained deacons who is not married. In the Latin Church, deacons may not marry after their ordination. Those who are married may not remarry if they are widowed and those who are single at the time of their ordination are called to remain celibate.

He said he saw the call to celibacy as being "for the glory of God, the kingdom of God."

Anne Cussen, the wife of Deacon Richard Cussen, who also serves in the archdiocese's Office of Worship and Spiritual Life, described her joy and pride at seeing her husband ordained a deacon in service of the Archdiocese of Boston.

"This is the most joyful day. I just can't describe how I feel, it's so beautiful, such a beautiful day. All my children are here. It was a great blessing, just a great, great blessing to our family. I know he will make a wonderful deacon," she said.

Deacon Cussen said he felt humbled and elated after the ordination, and "somewhat of a weight of responsibility compensated by a great deal of joy."