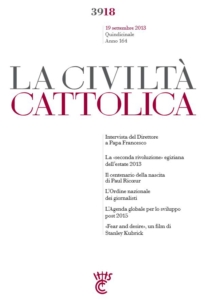 The Holy Father's interview published recently in La Civilta Cattolica, the Jesuit periodical that is considered one of the official organs of the Vatican, has certainly captured the attention of the worldwide media, in particular because of his comments on abortion and other social issues. For although the Church's principal activities are the pastoral work of our parishes, Catholic education, social services and health care -- which serve millions -- people can sometimes have the impression that all the Church's focus is on moral questions, particularly those concerned with sexuality.

There is a danger of reducing Christianity to some sort of a moral system. We are much more than that.

Our mission is to take people to Christ and, discovering Christ and his love for us, our hope is that people then embrace his way of life. As Jesus said, "If you love me you will keep my commandments." So, the commandments are the roadmap for a good life. However, the Church's mission is not just to be ethicists or moralists, but to lead people to the Lord and to a life of discipleship.

I spoke on this very issue in an address to the Knights of Columbus in August, and I want to share a portion of those remarks with you:

In today's world we must promote the Catholic way of life which is increasingly alien in the secular world, where our concern about unborn children or the sacredness of marriage makes us appear quaint and even nettlesome. We need mentors: parents, grandparents, Godparents, teachers, youth ministers, neighbors, who are ready to pass on the faith.

Pope Francis is calling on us to embrace the vision of reality that is the Church's faith and that values each and every human being, and stresses our responsibility to love and serve each other, especially the most vulnerable in our midst. The word that Pope Francis repeats over and over is "tenerezza,'"tenderness. On the Feast of St. Joseph, in his inaugural Mass he speaks to us about protecting people, showing loving concern for each and every person, especially children, the elderly, those in need, who are often the last we think about.

He says: "We must not be afraid of goodness or tenderness." He points to the heart of Joseph, his tenderness which is not the virtue of the weak but a sign of strength of spirit and a capacity for concern and compassion, for genuine openness to others, for love.

Some people think that the Holy Father should talk more about abortion. I think he speaks of love and mercy to give people the context for the Church's teaching on abortion. We oppose abortion, not because we are mean or old fashioned, but because we love people. And that is what we must show the world. Recently I read about an American relief worker in Africa, who reported on being at a camp for a food distribution line, it was very chaotic, even scary. He could see that they were running out of food and that these starving people were desperate. At the end of the line, the last person was a little nine year old girl. All that was left was one banana. They handed it to her. She peeled the banana and gave half each to her younger brother and sister. Then she licked the banana peel. The relief worker said at that moment he began to believe in God.

We must be better people; we must love all people, even those who advocate abortion. It is only if we love them that we will be able to help them discover the sacredness of the life of an unborn child. Only love and mercy will open hearts that have been hardened by the individualism of our age.

...When the Holy Father went to the island of Lampedusa he threw a wreath of flowers into the sea where thousands of refugees have perished in the modern day coffin ships that bring refugees from North Africa. The Holy Father talked about the globalization of indifference -- indifference to the suffering of others, to the fate of the unborn, the elderly, the handicapped, the mentally ill and the immigrants.

We must overcome this indifference in our own lives and help people to see that the Church's teaching is about loving and caring for everyone. In his talk to the Brazilian bishops last week, Pope Francis said: "We need a Church capable of rediscovering the maternal womb of mercy. Without mercy we have little chance nowadays of entering the world of wounded persons in need of understanding, forgiveness and love." The Holy Father alludes to Cardinal Kasper's work on mercy when he says that mercy without truth would be consolation without honesty and is empty chatter.

On the other hand, however, the truth without mercy would be cold, off-putting and ready to wound. The truth isn't a wet rag that you throw in someone's face, but a warm cape that you wrap around a person, to protect and strengthen them.

Project Rachel has been just that kind of a combination of mercy and truth that the Church's pro life efforts need to be about.

Our efforts to heal the wounds of society will depend on our capacity to love and to be faithful to our mission. The Holy Father is showing us very clearly that our struggle is not just a political battle or a legal problem, but that we must evangelize and humanize the culture, then the world will be safe for the unborn, the elderly and the unproductive. The Gospel of Life is a Gospel of mercy. If we are going to get a hearing in today's world, it will be because people recognize that authenticity of our lives and our dedication to building a civilization of love. We are called to live our lives as a service to others and commit our lives to give witness to the presence of God's love and mercy in our midst.

I also want to recommend the article ''The Christ Centered Pope'' by George Weigel. In it, he gives an excellent analysis of the Holy Father's remarks.

We are very saddened by incidences of gun violence in our nation this week, particularly the shooting at the Navy Yard in Washington D.C. Once again, these events underscore the danger of not dealing with the proliferation of firearms among the general population. It is regrettable that, as a country, we have yet to find solutions that will protect our population from this sort of massacre. The Washington incident, as is the case with many others, appears to have been perpetrated by a person with mental illness. This incident serves as another call for society to increase our care and services for people who face these types of issues.

...the 50th anniversary celebration of Xaverian Brothers High School in Westwood, which took place earlier today (9/20). Since the Xaverian Brothers' provincial Brother Gilroy and the first headmaster Brother Marcellus dedicated the school with Cardinal Cushing in 1963, the school has been very successful. That success continues even to the modern day, as is shown by the remarkable technology program they introduced last year.

Now the classrooms have what are called Smart Boards (which are like big tablet computers on the wall) where we would normally expect to see a blackboard. Using these Smart Boards teachers and students can collaborate in a very interactive learning environment. We are very grateful to the Xaverian Brothers for their commitment to Catholic education. They have a very proud tradition. The order was founded in Belgium with a missionary thrust, particularly to work among Native Americans. However, when the founder, Theodore Ryken, came to the United States, he realized the need was to educate the children of immigrants. That is a mission that the Xaverian Brothers here have dedicated themselves to ever since.

They have a glorious history here in the archdiocese and were very happy to celebrate the 50th anniversary of this fine school.