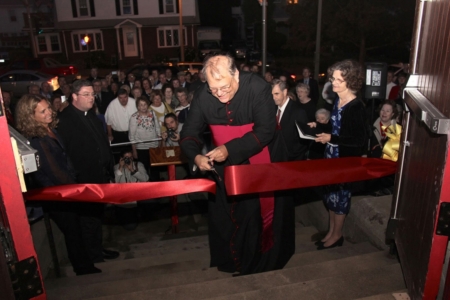 St. John's Seminary rector Msgr. James P. Moroney greeted guests who filled the steps and lawn outside the new library and lecture hall, before they crowded into the pews at the newly renovated church building.

"The Catholic Church is back on Oak Square and what a glorious day it is," he said.

Bishop Arthur L. Kennedy, a former rector of the seminary, gave a blessing for the new library, and guests heard remarks from Katie Everett of the Lynch Foundation; Ann Larosee, a Brighton local who advocated with local groups for the church building over the years, and former parishioner Secretary of State William F. Galvin.

After inviting guests inside, Msgr. Moroney gave a talk about the history of the property as the Catholic community in Brighton developed into the modern day.

Builders completed construction of the church in 1921 under Cardinal William H. O'Connell -- around the same time as construction at the seminary finished, according to Msgr. Moroney.

"Who would have guessed, a hundred years ago, as Cardinal O'Connell was completing the building of Saint John's Seminary and Our Lady of the Presentation in the same year, that God would will that these two great ecclesial institutions would be joined as one?" Msgr. Moroney asked.

The church and parish school closed in 2005. The school reopened as a community center in 2012 and Msgr. Moroney said the former church will now have a continuing legacy as well.

"Having formed more than three thousand priests since the days those front doors first opened, under the patronage of Our Lady of the Presentation, we will continue this good work for the Church for decades to come," Msgr. Moroney told guests.

The ribbon-cutting marked the completion of the first phase of renovation plans for the seminary, which welcomed a capacity enrollment in 2013.

In two subsequent phases of construction the new facility will become more fully integrated into the seminary community. After the second-phase construction restores the rectory, prepares the building to act as a conference center, and installs equipment to safely house seminary books, the collection of books held by the seminary will be moved into the new facility. The final phase will include external restorations of the church, landscaping and improved parking facilities.

Father John P. Culloty, pastor of St. Timothy Parish in Norwood was on hand for the ribbon cutting. He grew up as a member of the parish, discerned, served and lived in the community there for years.

"I know the neighbors were concerned to see the building sit here year after year, and they are delighted to see that there is some use to it and that they will be able to enjoy it for a long time to come," Father Culloty told The Pilot.

"Let me just say monsignor, this is what we should be doing, helping people, helping our Church especially in these very difficult times," the mayor said.

The seminary also presented the mayor and his wife Angela with flowers and an original copy of the history of the seminary.

Chris Peschel, a seminarian for the diocese of Fall River, said he noticed that on his walk over from the seminary grounds on Lake Street that people noticed him -- a 25-year-old in a Roman collar.

He said seminarians walking to the new library and lecture hall will give a kind of public witness, merely by passing through Oak Square.

"People are going to realize not only that St. John's Seminary is still open, but that we're here. And now we're not only in Brighton Center, we're in Oak Square as well," he said. "If it raises awareness of the seminary, at the very least, hopefully it will remind people to say a prayer for us here and there."