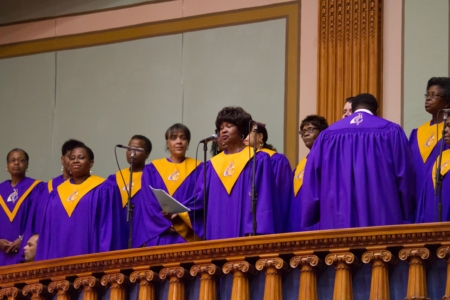 BOSTON -- Members of the Archdiocese of Boston Black Catholic Choir said they felt privileged to perform at the Statehouse in Boston as part of the Sept. 11 commemoration of the attacks of 2001.

Chambers said the choir was asked to participate by singing a song more secular than religious, but the choir still saw the event as an opportunity to take up public ministry. The choir performed "Lean on Me," by Bill Withers.

"We know what our job is, and we know that we are always ministering, because God was on the table here at this gathering," he said.

Chambers credited his wife Beth Chambers for making the performance at the Statehouse possible. Chambers said his wife built the connections with the groups organizing the event through her work at Catholic Charities.

Family members of those killed on 9/11 came together with victims of the Boston Marathon Bombing, to present Carlos Arredondo -- who rushed to the aid of Jeff Bauman, who lost his legs the day of the bombing -- with the Madeline Amy Sweeney Award for Civilian Bravery.

Those present at the ceremony also heard from family of people killed on Sept. 11, 2001, including Anna Sweeney who was five years old when her mother was killed.

Bill Richard, who lost his son 8-year-old Martin Richard in the Boston Marathon bombings, thanked the families of 9/11 victims for sharing the day, and delivered a brief message.

"Those we have loved and cherished, those who have changed our lives in some small or profound way are closer than we know because it is their light that shines on our world," he said.

The program included music from cellist Rhonda Rhider, the Boston Conservatory String Quartet, the Commonwealth Brass Quintet -- at a flag-lowering ceremony earlier in the day -- and others. The Archdiocesan Black Catholic Choir performed as the only faith-based group at the event according to director of Black Catholic Ministries Lorna DesRoses.

Chambers said the choir, and he, felt deeply honored to participate in the ceremony.

"This ranks right up there with our papal visit to Rome," he said.