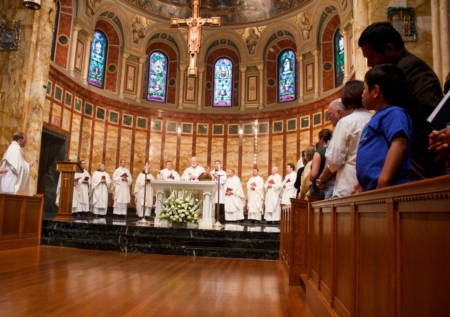 Cardinal O'Malley celebrates Mass in the chapel of St. John's Seminary to conclude the five-hour prayer vigil for peace in Syria and the Middle East, Sept. 7. Pilot photo/Christopher S. Pineo

BRIGHTON -- Faithful from the Archdiocese of Boston gathered Sept. 7 in solidarity with Pope Francis at the chapel at St. John's Seminary in Brighton for a five-hour prayer vigil for peace in Syria and the region.

The vigil was held simultaneously with a vigil led by the Holy Father in St. Peter's Square. The previous week, the pope had called for Sept. 7 to be a world-wide day of fasting and prayer for peace.

"We cannot continue to be indifferent to what is happening in Syria and in the Middle East," he said in remarks delivered before the final blessing.

"We don't just object to the terrible weapons being used, but to the slaughter of innocent people, and not just those people, but the thousands and millions of people who are being affected by war in that part of the world. They share this planet with us. They are our brothers and sisters," the cardinal said.

The cardinal said people cannot turn a blind eye to the suffering in Syria and that part of the world, or forget the pain caused by war even after it is no longer in the media spotlight.

"We cannot allow the globalization of indifference to continue. We cannot allow our attention span to be 15 minutes, and then we turn to some other thing," the cardinal said.

The cardinal also read a letter sent to President Barack Obama by Cardinal Timothy Dolan, the president of the U.S. Conference of Catholic Bishops.

"We affirm your decision to invite public dialogue and congressional review of any possible military action, and want to contribute to that discussion from our perspective as Catholic pastors and teachers," the letter said.

Msgr. James P. Moroney delivered the homily at the Mass. In it, he related the turmoil in Syria with the struggles of St. Paul and St. Francis at the time of the Fifth Crusade.

He said St. Paul likely made good time on his way through what is now Syria, walking four days, with haste and vigor to execute his mission. But, rather than conquering the local spirit of Christianity by felling the community there, instead he fell, Msgr. Moroney recalled from the Acts of the Apostles.

"As you know, he got knocked off his high horse, and blinded and helpless met Ananias, who conquered him with kindness and turned his wrath to peace, baptizing him into the dying and rising of Christ Jesus, his Lord and his Light," Msgr. Moroney said.

Msgr. Moroney noted that the baptism of St. Paul took place in the lands where bloodshed continues today.

"Only a few city blocks from the site of that baptism, now marked by a church constructed of the stones from an ancient city gate, is the Sarin-soaked soil where 426 children were gassed and more than a thousand adults were killed two weeks ago, a small portion of the more than 80,000 people who have died in that bloody civil war," he said.

This, he said, is the very reason Pope Francis called Catholics to pray for peace.

"For we whose Lord walks through the locked doors of our defenses and says 'Peace be with you,' what does it mean to pray for peace?" Msgr. Moroney asked.

He considered a journey made by St. Francis for a possible answer.

"Nine hundred and ninety-four years ago, the 37 year old father of a well-established reform of religious life and of the Church as a whole, walked to Damietta, Egypt to see the Sultan of that land at the very moment that the great king was engaged in mortal combat with the Fifth Christian Crusade," he said.

Msgr. Moroney said St. Francis likely journeyed for about a year between Assisi and Damietta as he witnessed "a ferocity of war no less evident than in our own time," before meeting the Sultan of Egypt, Malik-al-Kamil, the nephew of Saladin the Great -- the rival of Richard the Lionheart.

"Here was this medieval Goliath of a Sultan with an army so powerful he and his brother had conquered the whole Middle East, but he was conquered by the simplicity of the little poor one, the 'Poverello,' saying 'pace e bene -- God sent me to love you, to save your soul,'" he said.

Msgr. Moroney said the saint saw the sultan in human terms, and peace in that light.

"In other words, Francis saw peace not as the prize at the conclusion of an effective political negotiation, but as the opportunity to love the one who had been mistakenly cast as his enemy, to humanize him and recognize him as his brother," Msgr. Moroney said.

"Peace, as the Poverello teaches us, begins and ends with dying to all my self-serving power grabs, and loving the one who is right in front of me, who has been cast as my enemy," he said.

After the Mass, some of those in attendance reacted to the homily and the cardinal's remarks.

Born in Bosnia in the former Yugoslavia, in 1987, Seminarian Sinisa Ubiparipovic related his experience growing up in the Balkans to the current conflict in Syria. Having lived in a war-torn nation, he said he saw the call to peace made by the cardinal and the rector not as idealistic, but achievable through prayer.

"It is very hard to put a contract onto a piece of paper and create peace. Peace has to come from men's hearts, and that peace can only come from God. It is our obligation as Christians to take these days of fasting seriously, and pray seriously," he said.

Brian Prunier, 42, a father of two who drove in from Wayland with his family for the vigil, said he felt a strong drive to be at the vigil to pray for the region and the world.

"We are strong believers of peace, and very concerned about the escalation and the use of potential additional force, which we think could be devastating to the stability of the region and even beyond. So, we thought the best thing to do at this point is to pray," Prunier said.

He said he felt fasting enhanced his prayer and created a profound sense of connection for him when he received the Eucharist.

His wife, Lucy Prunier, added, "We wanted to come together as the pope asked us to do. We really felt moved to do that. We thought it was such a beautiful act, and we saw him doing that with the 70,000-plus people in Rome. It just felt like this was where we needed to be on a Saturday as a family putting all of our hearts in prayer."