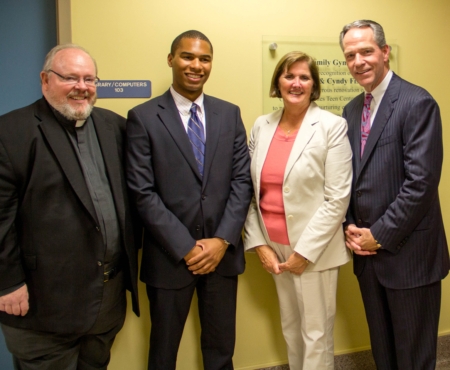 DORCHESTER -- For local business leader John Fish the dedication of a gymnasium at the Teen Center at St. Peter's in Dorchester, Sept. 6, became an opportunity to see first-hand the results of a renovation project he led in 2008.

Catholic Charities dedicated the "Fish Family Gymnasium" to Suffolk Construction Company CEO Fish and his wife Cyndy for their support of the Teen Center over the years.

"I just want to tell you how proud and thankful I am to have the opportunity to stand before you and say that I was part of this tremendous success story," John Fish said.

"We can't thank John enough for helping the place look so wonderful, and be such a lovely place," Deborah Kincade-Rambo, president of Catholic Charities, said.

After a ribbon-cutting ceremony, the Teen Center staff gave Fish and guests a tour of the facility.

At the Teen Center at St. Peter's, Catholic Charities Greater Boston serves teens ages 15 to 19 from the surrounding neighborhood in Dorchester with after school programs, skills training, college development and recreational activities.

Fish asked questions during each stop of the tour, concerning the programs, equipment and even the decorations in some of the classrooms.

"As we go along you will notice that there are four components that, pretty much, we branch off of. The main one is education. The second one is enrichment. The third one: leadership development. Our fourth is recreation, but first and foremost is always education," said Daniel Tavares, a program coordinator who led the tour.

Financial support for the center came from the 2010 Initiative for Catholic Education, the Yawkey Foundation, and the Campaign for Catholic Schools.

Associate vice president of the Campaign for Catholic Schools Pat Bartram took the tour along with Fish, and pointed out college banners on the wall of one classroom.

"Most of the kids that participate in programs like this, and many in our urban Catholic schools, are the first generation in their family to go to college, and so we start early to familiarize them with schools," Bartram told The Pilot during the tour.

After the dedication, a group of officers from the Boston Police Department played Teen Center members and staff in an inaugural basketball game at the newly dedicated gym.

"It helps create and improve relationships with the kids," Sexton said. ''We have been doing this for close to two years now. We do it about every six weeks or so. You know, it just makes us familiar with the kids, the kids familiar with us, in a non-confrontational setting."

Father Richard C. "Doc" Conway, who serves at St. Peter Parish and was on hand for the game, said the basketball program and a boxing program run by police at the center started to show concrete and positive results for young people and officers, since the center's renovation in 2009.

"Now a lot of them are on a first-name basis. We're at the point now where some of the kids that are involved in the teen center are thinking about being police officers," Father Conway said.