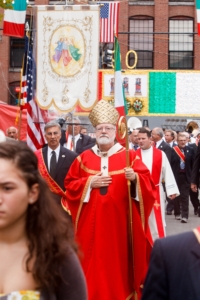 'After the Mass, I visited the headquarters of the St. Alfio Society, which is just across from the church, to bless the building and greet the members.' Pilot photo/CardinalSeansBlog.org

As I mentioned last week, it is traditional to start off the academic year in each seminary with the Mass We are very proud of Blessed John Seminary founded by Cardinal Cushing for second-career vocations. There, we provide a wonderful service for dioceses throughout the country who send us more mature candidates, older men, who are aspiring to the priesthood. I was very happy to celebrate the Mass of the Holy Spirit with them in the Chapel that was recently refurbished. This week, I celebrated the Mass at Blessed John XXIII National Seminary in Weston.

We are very grateful to Father Bill Palardy, the staff, and the faculty who do such a remarkable job preparing men for the priesthood there.

Feast of the Three Saints in Lawrence

On Sunday (9/1) I went to Lawrence to join in the celebration of Feast of the Three Saints at Holy Rosary Church of Corpus Christi Parish. The Feast is sponsored by the local St. Alfio Society. The festival is named for three ancient martyrs during the persecutions of Christians in 3rd century Imperial Rome, Sts. Alfio, Filadelfo and Cirino. The three were brothers from a noble Christian family in southern Italy. During the persecution, the three refused to renounce their faith but, because they were nobles the emperor didn't kill them straight away but tried different methods to persuade them. Eventually, he lost patience and sent them to the governor of Sicily in the city of Lentini to be tortured. Along the way, they passed through Trecastagni, the village where many people in Lawrence have roots. Even under the governor's torture the three refused to apostatize and they were eventually martyred. St. Alfio, the oldest and most outspoken, had his tongue torn out; St. Filadelfo was burned on a grill and St. Cirino was boiled in oil. These three martyrs have had a very large impact on the religious life of the people of Sicily. In Trecastagni, the celebration has been observed for more than 500 years. It has been 90 years that they been observing the feast in Lawrence. They tell me that, in all that time, this is the first time the Archbishop of Boston has celebrated the Mass for the Feast.

During the Mass, the Society also inducted several new members. After the Mass, I visited the headquarters of the St. Alfio Society, which is just across from the church, to bless the building and greet the members. It is a very colorful festival with the bilingual Italian-English Eucharist as the centerpiece, but there are also processions, marching bands and a wonderful street fair.

Monday (9/2), of course was Labor Day and I was happy to be able to join about 100 of the other priests of the archdiocese for our traditional Labor Day barbecue. We are very grateful to Father Bob Casey in the parish family of Saint Brigid's-Gate of Heaven that every year serve as our gracious hosts.

Also that day I was visited by Bishop Manuel da Rocha Felicio of the Diocese of Guarda, Portgual. He was in the area for a meeting in Rhode Island and stopped by to greet me. Then, that evening Father Bob Oliver, the new Promoter of Justice at the Congregation of the Doctrine of the Faith came to have dinner with us, while he is home visiting. He is doing very well in his new job and we are very grateful for his willingness to take this challenging position which is of such great importance in the life of the Church.

Mass with the World Apostolate of Fatima