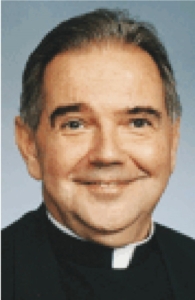 Father Alfonse Ferreira, OFM was to be the celebrant of the funeral Mass of his long time friend, Father George J. Dufour at St. Anne Church, Salem on Sept. 4. Father Dufour, who had been the pastor of the South Salem parish for more than two decades, died at Northshore Medical Center in Salem on Aug. 28.

A native of Madawaska, Maine he was one of the four children of the late George and Elise (Babineau) Dufour. He attended St. Louis School in Biddeford, Maine before the family moved to Lawrence where George attended Central Catholic High graduating in 1958. He attended Merrimack College in neighboring North Andover for two years and subsequently entered the archdiocesan seminaries. He received his A.B. in philosophy and B.D. in theology. He was a chaplain candidate in the US Army chaplaincy corps attending classes at Fort Hamilton, N.Y. and as an intern at Fort Knox, Ky.

Auxiliary Bishop Jeremiah Minihan ordained him to the priesthood at Holy Cross Cathedral on May 23, 1970. Following ordination, he received what would be the first of four assignments to archdiocesan parishes when he was named assistant at St. Jean the Evangelist (French) parish in Newton. He served the parish until August 1978 when he was named temporary associate for two months at St. Aidan, Brookline.

In October 1978, he was named an associate at Immaculate Conception Parish on the Winchester/Woburn line where he remained until being named pastor at St. Anne Salem on June 1, 1993.

He arrived in Salem to a new church recently built following a tragic fire some years previous. With consistent pastoral care, he kept the parish alive and well and helped create a family in the new home.

Father Dufour is survived by his sisters Cecile Berthold, Salem, N.H. and Therese LaRoche, Saco, Maine. He was predeceased by his brother Leo.