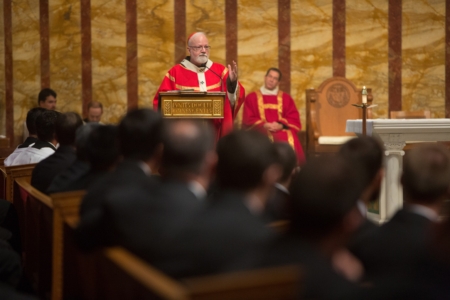 'Then on Wednesday (8/28) I went to St. John's Seminary to celebrate the Mass of the Holy Spirit, which we always celebrate to begin the academic year.' Pilot photo/CardinalSeansBlog.org

Tuesday (8/27), I met with our Coordinator of Marriage Ministries Kari Colella, her husband Steve and our Secretary for Faith Formation and Evangelization Janet Benestad. They came to speak to me about the recent national publication of our marriage preparation program, Transformed In Love. A few years ago, I appointed a committee to study our marriage preparation process. I had asked them to ensure that it had more catechetical content and was really an instrument of evangelization in preparing people, not just to receive the Sacrament of Marriage, but to live the Sacrament of Marriage in their family life. With much hard work, Kari and her committee developed Transformed In Love. It has had a wonderful effect on the young couples that have gone through the program and many of them have returned to the practice of the faith simply by this. Transformed In Love has now been published by the Daughters of St. Paul and we are very pleased that this wonderful resource will be available throughout the country.

Tuesday evening I invited Monsignor Francis Kelly, who is home visiting from Rome, for a dinner to celebrate the 50th anniversary of his ordination as well as his being named a Canon of the Basilica of St. Peter's Basilica in Rome. He has served as rector of Blessed John XXIII National Seminary, the director of the Casa Santa Maria for the North American College in Rome, he has been an officer for the Knights of the Holy Sepulcher and now he has been named by the Holy Father a Canon at St. Peter's Basilica. There he gathers with the other canons for the public recitation of the office and the conventual Mass.

Mass of the Holy Spirit at St. John's

Then on Wednesday (8/28) I went to St. John's Seminary to celebrate the Mass of the Holy Spirit, which we always celebrate to begin the academic year.

It was the feast of St. Augustine, the feast of my Capuchin province, so I was very pleased to be able to celebrate the Mass together with them. There are more than two dozen new men coming to the seminary this year, drawn from the different dioceses of New England. We are so pleased that the number of men in the seminary has increased so greatly over the years, and it is wonderful to see the Chapel filled for an event like that. I'm sure many will remember a time not so long ago that you wouldn't exactly have had to make a reservation to get a seat at the Mass to open the seminary year. I want to express my gratitude to the rector, Monsignor Moroney, the faculty as well as the many vocation directors from New England who joined us for the Mass. Some of them were telling me of their different experiences during the summer. A number of them had done "El Camino," the Way of St. James, in Santiago de Compostela in Spain. Others have been at the spiritual formation programs in parishes and were returning with great enthusiasm. I shared with them that the high point of my summer was being with the Holy Father at World Youth Day. I went on to talk a little bit about his message and his call to evangelization to make the Church present among people particularly those who are most distant from the Church.