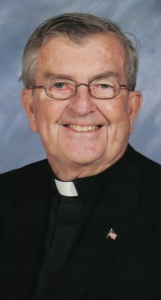 For more than 28 years he has been the pastor of Sacred Hearts Parish in Malden. The huge Gothic church sits obviously in downtown Malden, as "Father Daniel Hickey who is retiring effective Sept. 1, says "it's the heart of the city."

Born in Arlington on May 10, 1931 and an alumnus of St. John Seminary, Father Hickey was ordained to the priesthood at Holy Cross Cathedral on Feb. 2, 1959 by Richard Cardinal Cushing; the class was the first ordained by Boston's archbishop following his induction into the College of Cardinals by Blessed John XXIII the previous December.

Save an almost two year period when he served as a Navy chaplain in Vietnam between June 1967 and January 1969, Father Hickey has served in archdiocesan parishes. Following his ordination he was assistant at Sacred Heart, Middleborough until February, 1964. Before the Navy posting, he was an assistant at St. Bridget, Maynard (1964-1965) and St. Joseph, Needham (1965-1967).

He refers quickly and happily to his Navy experience which was in war-torn Vietnam but ended at the much more splendid setting of Coronado Naval Base just off San Diego.

On his return to the archdiocese in 1969 he served as either an assistant or an associate pastor in four large parishes of the archdiocese, each with an elementary school and in one case a high school: Sacred Heart, Lynn (1969); St. Charles Borromeo, Woburn (1969-1974); St. Anne in Boston's Readville section (1974); and St. John the Evangelist, Cambridge (1974-1985) which would be the longest assignment prior to Malden. The large, busy and varied parishes and experiences prepared him well for the appointment to Malden.

Cardinal Bernard Law named him pastor of Sacred Hearts on Jan. 8, 1985. He arrived and found himself with two associate pastors and for some years following the retired pastor, Msgr. Jeremiah Foley remained in residence in the rectory.

Over the years Father Hickey has seen growth and change, both in the parish and its "Cheverus Centennial Elementary School." While taking special care of the physical plant, he has also been attentive to the spiritual needs of the parish. One of those he points to is "caring for the liturgy" where he "was ably assisted by then Xaverian Brother (later Father) James Field (now deceased) who ably assisted in the formation of ministers and helped develop the liturgical music program.

Recently, a vibrant Vietnamese Catholic Community has settled in the area and received warm welcome at the parish.

Another of Father Hickey's happy accomplishments is "the number of visiting priests I have had assist me over the years." He singles out several for specific mention: Father Martin Connor, presently at Regina Cleri, who came from St. John Seminary on weekends for many years; this "tradition" is alive to this day, now the seminary's vice-rector, Father Christopher O'Connor comes from Brighton.

Having developed a relationship with the Jesuits at West School of Theology, now Boston College School of Theology and Ministry, Father Hickey served as a mentor for Jesuit deacons and "fourth year fathers" -- Jesuit priests completing advanced theological studies. Father Thomas Stegman, SJ, has been the steady Jesuit presence for the past 13 years.

Although there have been notable demographic shifts, the parish's elementary school enjoys a steady enrollment with Father Hickey pointing to the hiring of the first lay principal in 1988 when the Sisters of Providence withdrew staffing of the school.

Praising his staff, brother priests and the many people he has served in Malden over the past more than quarter century, Father Hickey expressed words of thanks to all and asked "for continued support and prayers" as he becomes a "retired shepherd."