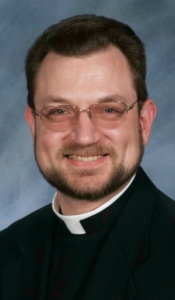 BRAINTREE -- Father Joseph F. Mozer said goodbye Aug. 15 to his colleagues at the Metropolitan Tribunal of the Archdiocese of Boston as he moves on to serve at a parish collaborative in Belmont as a parochial vicar.

Father Mozer said colleagues have helped him with his workload of cases as a tribunal judge before answering the call to serve in the collaborative.

He said he answers the call to serve in the collaborative with faith that the plan Disciples in Mission will yield success.

"I am a firm believer in the importance of pastoral planning for the life of the Church, and for the future of this archdiocese. A lot of good ministry is going on, on a day-to-day basis," Father Mozer said.

"We have been very good coworkers and good collaborators, and I am going to miss him a lot, but I wish him the very best where he is going in the collaborative there in Belmont," he said.

Father Paul Soper, director of the Office of Pastoral Planning, said the pastoral plan will benefit from the involvement of Father Mozer and priests like him being willing to serve as parochial vicars.

"It is very much the case that while the pastors play a critical role in the life of the collaboratives, the first and best support for our pastors in our collaboratives are their parochial vicars," he said.

"The pastors told us very strongly when they were appointed that they expected us to provide them with solid, quality parochial vicars who would be of extraordinary assistance to them. Therefore we were very pleased when it became clear that Father Mozer was willing to go to Belmont to serve the collaborative," Father Soper said.