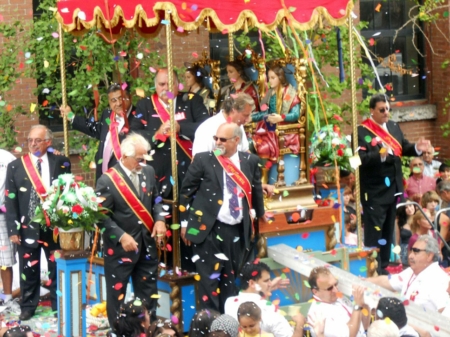 This Labor Day weekend will mark the 90th anniversary of the Feast of The Three Saints sponsored by Society of St. Alfio, Filidelfo, and Cirino in Lawrence. The festival rasies funds for the society's charitable works. Courtesy photo

Cardinal Seán P. O'Malley will celebrate Mass at 10 a.m. on Labor Day Sunday, Sept. 1, in Lawrence, "The Immigrant City," at the Holy Rosary Church of Corpus Christi Parish. The Mass is a high point of weekend ceremonies marking the 90th anniversary of the Feast of The Three Saints by the Society of St. Alfio, Filidelfo, and Cirino.

The Society of Sts. Alfio, Filidelfo, and Cirino traces its history back to the turn of the 20th century when thousands of Italian immigrants from Sicily flocked to Lawrence's textile mills in search of a better life. What they found instead was misery with a 56 hour work week for which they were paid some $9 a week. Surviving on a diet of bread, molasses, and beans, the mortality rate for children was 50 percent by the age of six, and 36 out of every 100 of the adult men and women who worked in the mills were dead by the time they reached 35. Squalid living conditions consisted of crowded apartments shared by several families who slept in shifts.

When the state passed a law limiting work down from 56 to 54 hours a week, the mill owners sped up the wheels of production to insure the same quantity of output while cutting the wages of workers by two hours. Taken together, the long hours, the dangerous conditions of the mills, and the inhumane living environment led to the famous Lawrence textile strike in 1912 that history still remembers as "Bread and Roses."

Well before the state enacted social security legislation of any kind, the Sicilian men of the Holy Rosary Church formed a Mutual Benefit Society in honor of their beloved patron saints Alfio, Filidelfo, and Cirino. By putting together money out of their own meager salaries, the Society provided financial assistance to families when a mill worker fell sick, became injured or faced some perilous situation. Even today, the money collected over the three day Feast is distributed to orphanages, to the needy, to local charities, and to scholarships.

In Sicily, the Feast of the Three Saints goes back hundreds of years and is held on May 10. The Saints Alfio, Filidelfo, and Cirino were three brothers of noble family heritage who were brutally martyred in the third century rather than to renounce Christ.

The first Feast of the Three Saints in Lawrence was held in 1923 when the life-sized statues of the three martyred brothers were carried from out of the Holy Rosary Church and through the city's "Little Italy" neighborhood. In keeping with tradition, the statues of the Three Saints are still taken through the formerly Italian neighborhood on the same exact route that they have been for the past 90 years. The old Italian neighborhood, however, is now mainly populated by Hispanics immigrants who, in many ways, can identify with the struggles that Sicilian immigrants endured.

The Feast formally opens on Friday, Aug. 30 on Common Street adjacent to the Holy Rosary Church of Corpus Christ parish with a variety of modern and Italian music, family entertainment, and food.

However, the real value of the Feast is to serve as a reminder of the importance of faith as a source of strength through difficult times. It also teaches young people of how the Catholic Church stood by their immigrant ancestors during their greatest hours of need in the past and is still there for them today.

The Sunday Mass celebrated by Cardinal O'Malley will be in the upper level of Holy Rosary Church, however, it will be televised in the church's lower level, and also under a tent outdoors to accommodate the anticipated overflow of worshippers.

The statues of the Three Saints will be taken out of the Holy Rosary church at precisely 3 p.m., Sunday afternoon to be carried through the streets and returned approximately three or four hours later. The public is invited to attend.