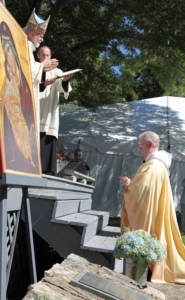 HINGHAM -- With almost 500 guests in attendance on Aug. 11, Cardinal Seán P. O'Malley gave his blessing as Archbishop of Boston to the third abbot elected at Glastonbury Abbey in its history.

At an outdoor Mass on the Great Lawn of Glastonbury Abbey in Hingham followed by a reception, Father Thomas O'Connor received the abbatial blessing from the cardinal after his election in June.

"We are certainly very blessed to have this Benedictine community in our archdiocese as an extraordinary spiritual resource and a constant witness to the primacy of the quest of faith in the life of faithful discipleship," Cardinal O'Malley said, during the homily.

According to Benedictine tradition, the abbot serves as the keystone of monastic structure and community. He becomes and lives as a guide and example of the ancient Rule of St. Benedict lived out in modern times.

"I believe that this Benedictine Monastery is truly meant for this time," Abbot Thomas said. "There are questions, fears, doubts, mystery. But there are also gifts: a community who prays, who is willing to be 'church' when it isn't a popular notion. This community has something important to say to the world at this particular moment -- that Christ is with us always."

Abbot Thomas served as a monk at the abbey for 45 years until his election by fellow Benedictines.

Glastonbury Abbey was founded in 1954 when Archbishop Cushing desired a Benedictine presence in the Archdiocese of Boston. The abbey became a spiritual center on the South Shore of Boston, as it provided a place of welcome for people who seek spiritual sustenance.

Monks now welcome any guests to share in their daily prayer, Mass, in the silence of reflection, and in the natural beauty of the wooded acres. According to the offices at the abbey, guests come for prayer, spiritual counseling, education, retreats, interfaith dialogue, social and cultural events, and for a respite from the stress and pressures of daily demands.

"The Abbatial Blessing was the most uplifting and spiritual event I have ever attended," said Desiree Connolly, a guest at the Mass Sunday.

"I could really feel the presence of the Holy Spirit and God's love," she said.