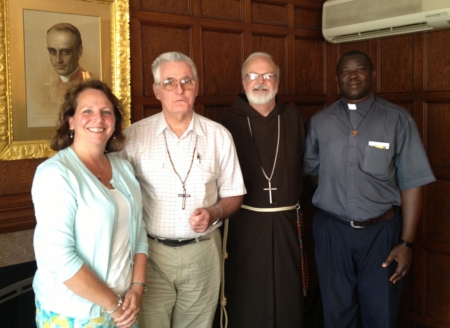 'Later that day, I also met with Archbishop Adrian Smith, SM, from the Solomon Islands who was accompanied by Maureen Heil from our Office of the Pontifical Mission Societies.' Pilot photo/CardinalSeansBlog.org

Last Friday (8/1), on the feast of the Portiuncula, I was visited by two provincials of the Conventual Franciscans, Father James McCurry from Baltimore and Father Warslaw Sokolowski, the provincial from Montreal. Saturday (8/2), I met with a Haitian Capuchin, Father Louis Jacques, whom I had met at the time of Pope Benedict's visit to Cuba. He was recently ordained and is visiting relatives here in Boston. He is staying with Father Joy at St. Angela in Mattapan. Later that day, I also met with Archbishop Adrian Smith from the Solomon Islands who was accompanied by Maureen Heil from our Office of the Pontifical Mission Societies. Archbishop Smith is a Marist Father from Ireland. Though I knew of him, I had never met the archbishop before. He is a member of the same bishops conference as Papua New Guinea, so he knows the Capuchin bishops who are there. He was in the Boston area doing mission appeal.

Particularly in the summertime, our Office of the Pontifical Mission Societies sponsors missionaries who come in from around the world to preach at Masses in our parishes. This has two purposes. One is, obviously, the economic support for the works of evangelization and mercy that are carried out in the name of the Catholic community in these countries of the Third World. However, it is also an opportunity for mission animation, to help us all grow in our awareness of the universality of the Church and our responsibility to be part of this mission of announcing the Gospel and caring for one another. I am always very edified by the generosity and the love that our people demonstrate towards the missions. Indeed, Archbishop Smith attested to the warm welcome that he received in the parishes and for the generous support that the people have given him.

This year, the national Diocesan Pro-Life Leadership Conference sponsored by the USCCB Secretariat of Pro-Life Activities was held here in Boston. Sunday (8/4), we heard a keynote address delivered by Archbishop Joseph Naumann. I celebrated Mass for them in Bethany Chapel here at the Pastoral Center and also presented the awards at the dinner that evening....We are so grateful to our Pro-Life Office director Marianne Luthin for working so hard to organize this gathering along with Tom Grenchick and the staff of the U.S. Conference of Catholic bishops.

At the beginning of August each year the Knights of Columbus hold their Supreme Convention and I always like to attend as much as possible. This year the convention was held in San Antonio, Texas. I was pleased that, as usual, there was a very good representation of Knights and their wives from Massachusetts. Also with us were Bishops Hennessey, Deeley and Kennedy. This year, I was honored to be asked to serve as the keynote speaker at States Dinner. Earlier in the day we heard the annual report of Supreme Knight Carl Anderson. It is always very inspiring to learn how much good the Knights of Columbus are doing throughout the world. This year at the convention there were representatives from the Ukraine and Lithuania. It certainly betokens the desire of the Knights to grow throughout the Universal Church.

They also presented a wonderful film on the life of Pope Francis that the Knights have supported. I am hoping will be able to get a copy to be aired on the CatholicTV Network. Those of us who were able to see it found it very inspiring. On the subject of CatholicTV, I was very pleased that they were there to provide such extensive coverage and bring this important event to our Catholic people.