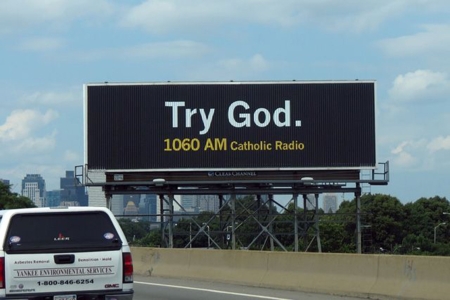 A car drives past a billboard promoting Catholic radio on the expressway in the Dorchester section of Boston. Pilot photo/courtesy WQOM

BOSTON -- 1060 AM WQOM Catholic Radio is launching a billboard campaign with the message "Try God: 1060 AM Catholic Radio" across the greater Boston area.

According to a press release, the goal of the billboard campaign "is to reach the widest possible audience in a broad cross-section of the Boston community as a way to expand the station's current evangelization efforts and bring the 'good news' of the Gospel message to even more people in the region."

The campaign features 23 billboards distributed around Boston on major thoroughfares, including I-90 East (Brighton), I-93 North (Medford) and I-93 South (Dorchester).

The broad and inclusive Try God theme is a message geared toward all people, regardless of their present faith, beliefs, or circumstances, inviting them to explore the Catholic faith and grow closer to God through Catholic radio.

"We believe billboard advertising is integral to our mission of sparking interest in our Catholic faith and reaching souls in the name of Jesus Christ," said Jim Wright, president of 1060 AM.

Chris Kelley, station manager, said, "The Try God theme will create vital exposure and broad interest for 1060 AM. Catholic radio's goal is to reach as many souls as possible, particularly when they are in their cars -- a great time to listen. The variety of the programming combined with numerous call-in-shows allows for direct listener participation on most any subject."

Boston-area Catholics can listen to Catholic radio programming in three ways: on 1060 AM, on wqom.org on their computers and on the iCatholicRadio app for mobile devices and tablets. iCatholicRadio has close to 100,000 downloads of the popular app from 122 countries worldwide and countless testimonials from listeners whose lives have been transformed through Catholic radio.