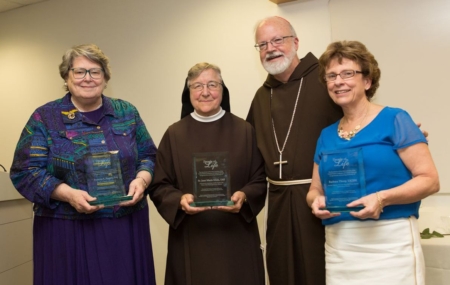 BRAINTREE -- Two local women, Frances X. Hogan and Barbara Thorp, have been honored for their lifetime commitment to the pro-life movement with the 2013 People of Life Award.

Cardinal Seán P. O'Malley, who is chair of the Committee on Pro-Life Activities of the U.S. Conference of Catholic Bishops (USCCB), presented the awards at the Diocesan Pro-Life Leadership Conference held Aug. 4 at the archdiocese's Pastoral Center in Braintree.

Over 150 diocesan, state and national Catholic pro-life leaders and guests from across the country attended the awards dinner, sponsored by the USCCB Secretariat of Pro-Life Activities.

The People of Life Award recognizes those who have answered the call outlined by Pope John Paul II in his 1995 encyclical "Evangelium Vitae" ("The Gospel of Life") by dedicating themselves to pro-life activities and promoting respect for the dignity of the human person. It is presented to a practicing Catholic in honor of his or her significant contributions in service to the culture of life.

Frances X. Hogan serves as a corresponding member of the Pontifical Academy for Life and is co-founder and former president of Women Affirming Life, a national group of Catholic women who witness to the value of all human life through their professions, their families and community services.

Introducing Hogan, Richard Doerflinger, associate director of pro-life activities for the USCCB, said she also serves life in her full-time work as a partner in a law firm to help provide affordable housing and economic development for people with low incomes.

"So, everything previously that I mentioned, she did 'in her spare time.' So, don't you feel like a biscuit?" Doerflinger joked with guests.

Hogan sits on the board of the Massachusetts Catholic Conference (MCC) and chairs its Pro-Life/Pro-Family Sub-Committee and worked to defeat the 2012 ballot question on physician-assisted suicide. She has also served on the boards of the Pro-Life Legal Defense Fund, the Value of Life Committee and Massachusetts Citizens for Life.

She thanked her family and friends for their support, as well as her law partners.

"Ultimately, of course, without the faith that we share, there is no way anybody could stay in this movement, and I acknowledge with tremendous gratitude the leadership of the Church. Without the Church in this movement, I don't know where we would be," Hogan said, thanking Cardinal O'Malley for his leadership in fighting against physician assisted suicide in Massachusetts.

Barbara Thorp, who has a master's degree in social work from Rutgers University, has served the Archdiocese of Boston in various capacities for 35 years, including as director of the Office of Pastoral Support Outreach and Child Protection, director of the Pro-Life Office and a social worker for Catholic Charities.

"Despite the enormous gifts that Barbara brought to the job as a mental health professional, she has remained humble and generous in witnessing to God's merciful love with those who most needed to hear the message," said McClusky.

Thorp developed and directed the archdiocesan post-abortion ministry Project Rachel. She managed the Cardinal's Fund for the Unborn to provide aid to pregnant women in crisis, supervised the crisis pregnancy program Pregnancy Help, and helped develop end-of-life resource manuals for parishes. Along with fellow award recipient Hogan, she was a founding member of Women Affirming Life. Most recently, following the Boston Marathon bombings, Thorp led special crisis and support counseling for students and staff at The Newman School in Boston.

Thorp said she was surprised by the award, thanked her family, and pointed out a common theme she said all pro-life advocates share.

"We have all tried to find our way really to celebrate life together, and to find joy, and to be witnesses to hope," she said.

Sister Jane Marie Klein received the honor as an advocate for Catholic health care and conscience rights. In 1996, she became chairperson of the Board of Trustees of Franciscan Alliance, a 13-hospital Catholic health care system in Indiana, Illinois and Michigan after serving as the corporation's president and CEO.

Having held senior administrative positions in hospitals and also worked in medical social work and accounting in her early health care ministry, she currently serves on a number of hospital and business boards and is a member of the Fort Wayne-South Bend diocesan finance council.

She has been a member of the Sisters of St. Francis of Perpetual Adoration provincial council for over 20 years, and is featured in the USCCB video, "Speak Up for Conscience Rights."

Hogan, Thorp and Sister Jane join 20 other People of Life awardees since the Pro-Life Secretariat inaugurated the award in 2007. More information on the People of Life Award and the bishops' People of Life campaign is available online at www.usccb.org/about/pro-life-activities/2013-people-of-life-award.cfm.