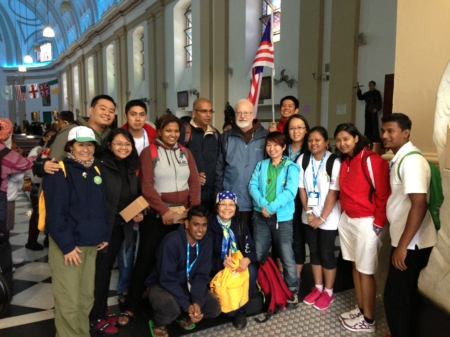 'At my catecheses there were people from all over the English speaking world, many from the Philippines, from India, from Malaysia, Canada, Australia, England, and the United States.' Pilot photo/CardinalSeansBlog.org

This week I am in Rio de Janeiro, Brazil, participating at the World Youth Day events that are taking place here. There is a wonderful atmosphere here in Rio with the arrival of the Holy Father. It is very historic. People are quite aware that this is the first pope elected from this hemisphere, and the Holy Father's arrival has generated great enthusiasm.

He has already visited a number of places where he has made very important impressions, beginning with the opening Mass at Aparecida -- which is the largest church in the hemisphere. Many thousands of people were there for that Mass. He also visited a hospital that takes care of people with drug addiction problems and has visited one of the slums in Rio, which are called "favelas." Thursday night, we had the opening ceremony. It was on the beach in Copacabana. I think there were probably about a million people there. It was just an extraordinary event. The Holy Father seems very relaxed and is just making a beautiful impression.

A very significant part of World Youth Day events are the catecheses that are given during the week in different venues. I think there are about five American bishops involved in this, and bishops from other countries as well, who have been asked to go give these catechetical instructions. For the last three days I have been very busy giving these catecheses, one each day, in three different venues, where I go in the morning and give a talk, for half an hour or so, to the young people, then we have a question and answer session, and we finish by offering Mass for them. There were 273 venues, that the organization calls "Catechesis headquarters." At my catecheses there were people from all over the English speaking world, many from the Philippines, from India, from Malaysia, Canada, Australia, England, and the United States.

Today was the third one, and we met at the center that the Knights of Columbus, the Bishops Conference, and the Jesuit Conference have established here, a special place for all the young people coming in from Canada and the United States. I think we had about five thousand young people there. It was a wonderful experience with great enthusiasm. We had the catechesis and there were lots of questions and answers before the Mass. Afterwards, I met with the Boston group. We had a nice conversation with questions and comments about World Youth Day and about the Church.

This afternoon, we are getting ready for the Stations of the Cross, that the Holy Father will be attending, and then tomorrow we have a Mass in the Cathedral with the bishops the priests and religious of Brazil and also with the seminarians. In the afternoon of course will be the vigil, and then on Sunday morning the closing Mass by the Holy Father. This World Youth Day is going to be -- and has already been -- a great success. We travelers here have found it a wonderful experience. The Brazilian parishes and parishioners have been so gracious and welcoming to all of us. It has truly been a wonderful experience of the Church.

I have been following Pope Francis on the news reports....I was touched about some of his remarks on the plane coming from Italy, particularly his comments about the youth and his concern for the great unemployment among young people, and he also gave a very interesting opening talk. His style is one of such graciousness and he talked so humbly about having to "knock gently at this door" at his first public address upon arriving in Rio. I think the natural way that he does things with such informality is very endearing to people. He has certainly made himself very accessible to the people in the crowds wherever he has gone.