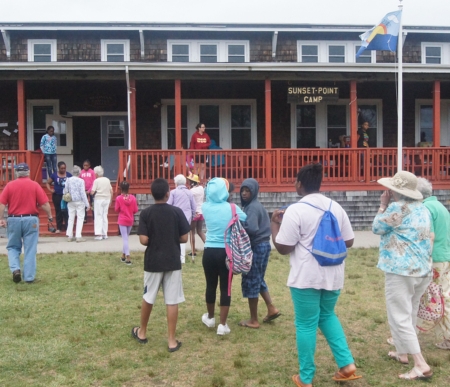 HULL -- The Proparvulis Club, a group of women who volunteered at Sunset Point Camp in Hull -- a summer camp for at-risk, low-income children -- for more than 90 years said goodbye to the campers, July 25, at the final "Proparvulis Day."

"We are so happy to have you here. A big thank you from myself, the whole staff, the kids, and all their parents, without all of you we wouldn't be here. So, thank you. Hopefully you aren't strangers in years to come. We always like having visitors," said Brian Ahl, director of the camp.

The club announced that they would end operations at their 90th anniversary gathering in May, and the treasurer presented Sunset Point Camp with a final donation at the event Thursday.

"Our club motto was: 'having fun while doing good.' I know I have had fun in my 60 years. I hope all the campers have had fun, but I guess we have done some good along the way. Since this is our final day at camp -- maybe not yours but ours-- we are very happy to present our final check in the amount of ninety five hundred dollars," Beverly Baker, treasurer for the Proparvulis Club, told the campers. "We wish all of the campers as many happy memories of the camp as we have. To the campers and the staff, we wish you well and a wonderful future."

Proparvulis means "for the little ones" chosen as the club dedicated its service to children and became an important source of support for the camp since the club was founded in 1922.

"We will always remember your fine spirit, that spirit of doing good and having fun," said Deborah Kincade Rambo, president of Catholic Charities -- the organization responsible for the camp since the Massachusetts State Council of the Knights of Columbus donated it to the organization in 1918.

More than 30 members of the club attended as campers presented a program and presentation for their guests, greeting them as they arrived and escorting them into the dining area.

"All of the children appreciate everything that the club has done over many years," Beth Chambers, director of Catholic Charities South and former director of the camp, told the guests.

Some of the attending club members donned large hats --a relic from the dinner dances the Proparvulis Club used to host -- while some campers wore plastic hats decorated with glitter and words.

Guests heard songs from the campers and a little bit of the history of the club and their relationship with the camp, as part of the schedule of events.

After the presentations, Club members and campers had lunch together.

"We have had so much fun in the club. I met all my friends through the club. We are still friends. We still go out together, and we have been friends over 50 years," said Kaye Hoyt, past president of the Proparvulis Club.

The Proparvulis Club, an affiliate of Catholic Charities, was active in the community for more than 90 years, supporting a range of causes. Members are primarily from Quincy and Milton.

Keanu, age 12, said he understood how much the club has contributed to the camp, which has a swing set, an in-ground pool, various types of toys, quarters for the campers to stay, and outdoor space for campers to play and explore the nearby beaches.

"They helped out a lot, because if they didn't we wouldn't have all the stuff we have at this camp," said.

For 93 years, Sunset Point Camp in Hull has provided children of the Greater Boston area the opportunity to have a summer camp experience.

For more information, contact Catholic Charities Greater Boston at 617-506-6600 or by e-mail at sunsetpoint@ccab.org.