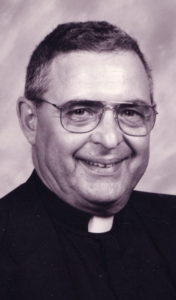 Father William F. Salmon said that over the course of his 48-year career serving as a priest of the Archdiocese of Boston his greatest joy was to bring people back to the flock that had drifted from the Church.

Born on Dec. 25, 1938, Father Salmon grew up in Brighton where his family attended Our Lady of the Presentation Parish.

"My mother and father were very supportive of my call to the priesthood," he said.

An only child, Father Salmon received most of his encouragement in the faith from his parents, but he said the model to which he strived and felt a calling was the example provided by the priests he observed at every Mass.

"To me they were men, whom I got to know over the years as a boy, who were authentic and preached, like any priest does, their faith that they have previously lived," he said.

Father Salmon said he preferred to sit at the back of the church during the Mass, because he liked to see the entire congregation and observe the sense of community.

Ultimately, his interest in the community, the inspiration he drew from the priests and the guidance of his parents became the beacon he used to navigate his calling to serve the people of God. He said his parents even attended Mass with him daily when he was on breaks from his studies at St. John's Seminary.

"Their support was eminently important in my becoming a priest," he said.

He received ordination at the hands of Cardinal Richard J. Cushing on February 10, 1965.

His first assignment was at St. Mary Parish in Chelmsford, where he served until 1971. Over the years he served as parochial vicar at St. Jude Parish in Waltham, St. Theresa of the Child Jesus Parish in Watertown, and Our Lady of the Presentation in Brighton.

During his time in Waltham, he also served on the governor's task force for the Human Rights Commission, defending the rights and human dignity of people in care of the state.

He also served on ecumenical councils in Chelmsford, Waltham and Watertown.

Father Salmon served as confessor for 23 years to a group of Dominican Sisters in Watertown.

"Hopefully my presence would indicate the Church's concern for those in need, not only for the faith community, but the wider community," he said.

Father Salmon plans to assist in sacramental ministry at St. Mary in Hanover and St. Helen's in Norwell. He also hopes to visit his friend in England, Bishop Philip Anthony Egan of the Diocese of Portsmouth, England.

"I've never been to England, so I am relying on him to show me around," Father Salmon said.

In the meantime, he said he hopes that more young men will consider the priesthood as they visit their local priests to get a hands-on feel for a vocation.

"I would encourage young men to do that and to think about becoming the hands and the voice of Christ," he said.