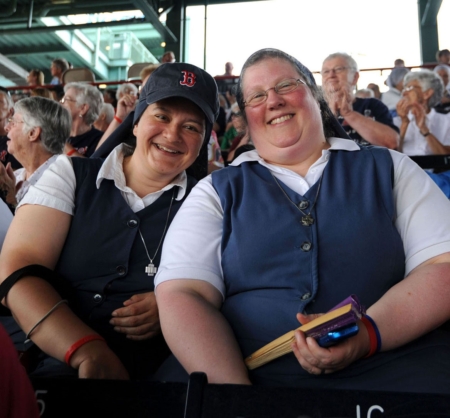 BOSTON -- Almost 200 sisters from around Massachusetts packed into the grandstand to watch the Red Sox face the Colorado Rockies, June 26, as Fenway Park rebooted a tradition called "Nun Day" that dates back to the 1960s.

"On a summer afternoon Sisters from all parts of the archdiocese would gather to cheer for the Red Sox and enjoy one another's company. It was always a great time that the Sisters looked forward to. The last Nun Day Celebration was in the mid-1960s," said Sister Marian Batho, CSJ, delegate for religious for the Archdiocese of Boston.

Sisters from the Diocese of Springfield joined sisters from the Archdiocese of Boston as the women religious -- technically, not all nuns -- mingled with the crowd to root for the home team.

"Thanks to the generosity of the Red Sox and the hard work of Sarah Keaney McKenna, vice-president of fan services and entertainment, the wonderful tradition of sisters' enjoying an afternoon at the ballgame was revived," Sister Marian said.

Sister Marian said at least one of the sisters in the ballpark on that summer afternoon remembered going to the last such event when Cardinal Richard J. Cushing led the annual expedition.

The Pilot found a booklet of photos from a July game in 1961 when the Detroit Tigers took the Red Sox, 6-2, after Cardinal Cushing threw the first pitch.

When Sister Catherine Loughran, CSJ threw out the first pitch at the 2013 game, fans and women religious alike cheered, hoped and prayed for a different result.

"If you look back at the pictures, there is a picture, I believe, of the sister's day at the ballgame in 1966. Sister Catherine is right there in that picture. Now, it's a younger version of Sister Catherine," Sister Marian said.

"All of this is a recognition of the enduring commitment of the sisters. Time does not change the commitment," she said.

"Having an opportunity for fun, and for friendship, and some relaxation is very important, but I think the deeper meaning of our being together is we recognize our common commitment to Christ and to Christ's Church. That was very evident at the ballgame as well as our prayers and our cheers for the Red Sox," Sister Marian said.

Sister Marian thanked the Red Sox for hosting the sisters that day.

"They outdid themselves in terms of hospitality, and I think everyone who came enjoyed. There was a certain sense for people who couldn't come that they really wanted to be there, and they were there with us in spirit," she said.

Sister Marian said the most notable moment for her happened in the stands, interacting with the fans, not on the field.

"We were mixed in with everybody else, and it was just nice to see how we were received and how we were able to receive others. It's to me a demonstration of real unity, that we really are all one in the Lord, no matter who we are, no matter what we do," she said.

Sister Marlyn Monge, FSP, said she attended her second Red Sox game of the season when the sisters took to the stands that June day.

"I am a lifelong Red Sox Fan, because I am from Eastie, so being able to be in the grandstand supporting my team with all the sisters, knowing that the Red Sox in a sense were honoring the sisters as well, was an amazing experience," Sister Marlyn said.

Sister Marlyn said she dreamed of playing alongside the likes of Jim Rice and Carl Yastrzemski, as the first female Red Sox player.

In the stands she was able to do her part in the effort -- in prayer at least.

"People were like, 'Oh! We're definitely going to win today because the sisters are here.' I was like, 'Hey, you know what? Maybe that's true, in which case maybe the Sox should invite us more often, and then we'll win the World Series.' That would be sweet," Sister Marlyn said.

The Red Sox prevailed, 5-3, over the Rockies that day as pitcher John Lackey sat down 12 Rockies batters, allowed only two runs, and pitched seven innings.