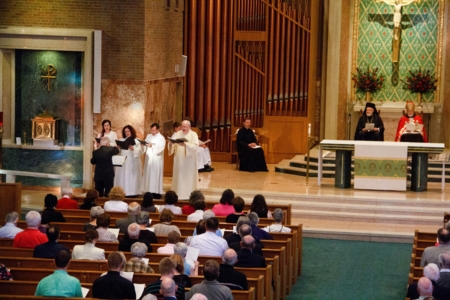 NEEDHAM -- As Cardinal Seán P. O'Malley and Greek Orthodox Metropolitan Methodios brought their communities together in an annual ecumenical celebration of vespers at St. Joseph Parish in Needham on the Feast of Sts. Peter and Paul, June 28, they called not just for unity within Christianity, but unity in going out to face the challenges in the modern world.

"It is important that in these last few decades, that we have rediscovered that we are brothers and sisters in the Lord," the cardinal said, during the service.

The two men, who led a group of Boston Catholics and Orthodox to Rome and Constantinople on pilgrimage in 2007, spoke at the prayer service as they continued a long-standing tradition of outreach between their communities.

"The measuring stick of our unity is the unity that exists in the Trinity," the cardinal said.

Each addressed the need for churches to stand united in defense of Christian values.

"If the world finds it difficult to believe the Gospel, in part it is because of the bad example of disunity that divides Jesus' disciples," the cardinal said.

Cardinal O'Malley spoke about recent success defending Christian principles, particularly in a push the two leaders spearheaded to defend human life when Massachusetts faced the legalization of physician assisted suicide earlier this year. He also said over the years he has appreciated the increased presence of Orthodox churchmen at the March for Life in Washington, D.C.

He spoke about the struggle against abortion, euthanasia and the redefinition of marriage.

"All of these things struggle at the heart of Christian morality. It is so important that we work together to bring the good news of the Gospel to the modern world and a new generation," Cardinal O'Malley said.

The metropolitan expressed similar conviction on the need for Christians to not just come together, but to work together.

"Our mandate in the world cannot support any further the luxury of preaching division, of calculations and reservations that become spiritual harm, or armchair ecumenical discussions that are never-ending. Mankind needs an answer which can only be the manifestation of the one Christ through his united teaching," he said.

After the prayer service, the cardinal and the metropolitan joined their guests for a reception in the church hall where they celebrated the cardinal's birthday.

This year, the ecumenical gathering included Christians from outside the two communities led locally by the cardinal and the metropolitan.

"We feel that as our wider culture grows less-and less recognizably Christian, it is more-and-more important for those of us who want to stay faithful to the teachings of Christianity to draw together, encourage one-another and support each other," said Peter Mommsen, an Anabaptist from a Bruderhof community in Pennsylvania, who attended the ceremony after meeting with the cardinal earlier that day.

In Boston, the Catholic and Orthodox communities and their leaders uphold a local history of outreach that mirrors a tradition in Rome and Constantinople in the ecumenical spirit of a 50-year-old teaching of the Second Vatican Council.

Since the pilgrimage in 2007 the cardinal and the metropolitan observed and kept a tradition in Boston to invite the Greek Orthodox to the Feast of Saints Peter and Paul followed by an invitation to the Catholics to the Feast of St. Andrew.

The cardinal will likely join the metropolitan for the Feast of St. Andrew later this year at one of the local Greek churches, as he has in years past.

Father Demetrios E. Tonias, pastor of Taxiarchae Archangels Greek Orthodox Church in Watertown, said grassroots efforts of brotherhood, sisterhood and friendship -- like that between the communities in Boston -- can make Christian unity more than a theory.

"It is going to take the bones of the theory and put flesh and blood on it," he said.