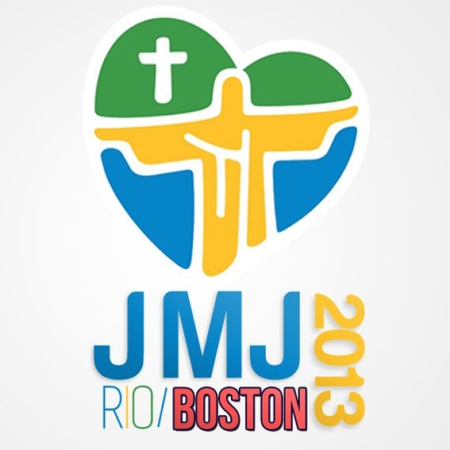 WALTHAM -- In keeping with the theme of World Youth Day 2013, "Go and make disciples of all nations!", one local parish hopes to reach out to all nations by opening its doors, and using technology to unite pilgrims in two nations.

The trip from Boston to Rio de Janeiro, Brazil takes 13 plus hours, covers about 4,800 miles and can cost thousands of dollars -- but if some Catholics and young people can't make it to WYD 2013, July 23-28, Father Michael L. Nolan, pastor at St. Mary's in Waltham, hopes to close the distance for them using social media and opening his parish for a celebration to coincide with and showcase live events in Rio.

"Since there are other means of uniting us, through Skype or through the internet, through computers, or through social media, why not take advantage of bringing together those young people who have that desire to be with the Church, to be with other young people, but cannot physically do it because of their circumstances? Why not make that effort to reach out to them and to make that proposal to them?" Father Nolan said.

Using a Facebook page created on June 13, Facebook.com/WYD.Boston, and a video featuring Pope Benedict XVI, Father Nolan recently began to invite Catholics and young people to St. Mary's for an overnight World Youth Day celebration at his parish on the weekend of July 26-28, as pilgrims gather in Rio.

"(Facebook) is how young people communicate. They don't use regular mail. We don't have their addresses a lot of times. They are not paying attention to bulletins, so this is a way that you can reach a lot of people in a short amount of time," he said.

Father Nolan said the parish created the event to bring together teenagers, young adults and college students who are unable to travel to Rio, and with the technology available through old and new media, no one who comes needs to miss any significant events as they happen in Brazil.

He said the simultaneous expressions of faith between pilgrims in Rio and guests at St. Mary's reflect a gap bridged using modern technology, but also reflect a timeless spirit for joining other Christians in worship.

"The Church is a sign of unity. It is an instrument of unity. It has to do that in every way possible, no matter what the obstacles are," he said.

Organizers will show the events scheduled to feature Pope Francis on large screens in the parish throughout the weekend as well as offer Mass, perpetual adoration, confession, catechesis, a talent show, a soccer tournament, food, music and exhibits.

Father Nolan said Cardinal Seán P. O'Malley also hopes to communicate with those in Waltham via Skype while he is in Rio with the Holy Father.

St. Mary's sent out emails inviting pastors at parishes with youth groups, teenagers, young adults, or college students to consider joining the celebration for the weekend.

Father Nolan particularly encouraged seminarians to participate by ministering to the pilgrims at the celebration in Waltham.

"I think they are inspirational, and therefore, they will speak by their witness to young people who might never have had a chance to share a meal, or spend some time with a seminarian, or just meet one," he said.

Organizers said they hope the celebration will be preceded by individual parishes hosting preparatory events at their parishes starting on the opening Tuesday of WYD 2013, July 23. Participating parishes are encouraged to gather on these nights for prayer, fasting, charitable works, or other social events highlighting Catholic identity. Each group is encouraged to design these days according to their needs.

Parishes seeking to participate should designate a group leader, who will coordinate registration for the group. The forms and necessary information to register can be downloaded from the Facebook page. The registration fee for the weekend is $50 per person. St. Mary's asks that each parish sending young people contribute $500, because there is not time for fundraising. Rental equipment such as big screens, sanitary facilities and food should be covered by the donation.

Father Nolan said the parish will continue the theme of outreach to all nations by donating surplus revenue, if any, to St. Peter Church in Bainet, Haiti, which took damage in the earthquake of 2010.

"It will be expensive and we need help. Any extra proceeds, if there are any, will go to charity, again reaching out to people of all nations," he said.

For more information contact Father Michael Nolan at 781-891-1730, or register at Facebook.com/WYD.Boston.