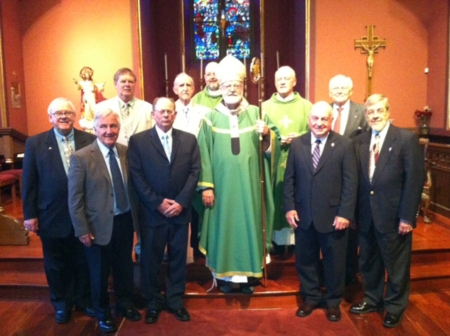 'That evening (6/19), was the Mass and dinner at the cathedral for the jubilarian deacons.' Pilot photo/CardinalSeansBlog.org

On Saturday (6/15) I went to St. Timothy's in Norwood for a Mass to celebrate the parish's 50th anniversary. It is a very beautiful parish, on the shores of a lake and, fortunately, after so much rain we had beautiful weather for the celebration. St. Timothy's was established during the time that Bishop Minihan was the pastor at St. Catherine's Parish. He acquired this magnificent piece of land for the church. Father John Culloty and his team have done a marvelous job with the parish. There are just so many different parish activities involving a very wide range of people in the parish. During the Mass they were able to showcase a number of those activities which included works of mercy, religious education and outreach.

Father's Day at the cathedral

Sunday (6/16), I celebrated the Spanish Mass for Father's Day at the cathedral. We had a group of visitors from Toronto joining us. Of course, we gave a special blessing to the all the fathers in attendance at the end of Mass. We always like to stress the role the father in the religious life of the family. Many people are surprised to learn that one of the highest predictors of whether someone is going to practice their faith is the example they receive from their father. I think it is very common for people to think of the mother as the transmitter of the faith. Of course, women are often the more religious members of the family and do so much in the spiritual formation of their children, but what makes an incredible and indelible imprint on a child is the example of their father.

Certainly, in my own life, my father gave a wonderful example of a devout Catholic. He often went to daily Mass, prayed the rosary with us and spoke to us about our faith and the Scripture readings at Mass. I was also very touched while reading the biography of Pope John Paul II when he spoke of seeing his father kneeling by his bed every night saying his night prayers and how, as a child, that impressed him. So, on Father's Day we prayed for all our fathers and thanked God for them. We want to encourage fathers to embrace the role that they have for the faith formation of their children and to realize how important that is.

On Tuesday (6/18), I went to Sacred Heart Retreat House in Wareham for our annual seminarian retreat. Father Jim DiPerri preached the retreat and I celebrated Mass and had a dialogue with them. It is always a wonderful opportunity for the seminarians from all the different seminaries to pray together, be together and get to know each other better. It is also a good way for them to begin the summer, as they prepare for their summer assignments in the different parishes and ministries.

That evening (6/19), was the Mass and dinner at the Cathedral for the jubilarian deacons. Among the jubilarians was Father Joe Arsenault. He was ordained a permanent deacon 25 years ago with this class, but went on to become a permanent priest! Also concelebrating the Mass was Father Frank Silva, who had been the director of the diaconate program at the time of the ordination. Following the Mass there was a dinner for the deacons and their wives, during which they showed pictures of the class at the time of their ordination. We had presentations to the deacons and their wives and we prayed for the members of the class who have passed on. It was a lovely evening. We congratulate all the jubilarian deacons and want to express our gratitude to Deacon Pat Guerrini, who did so much to make the celebration possible.