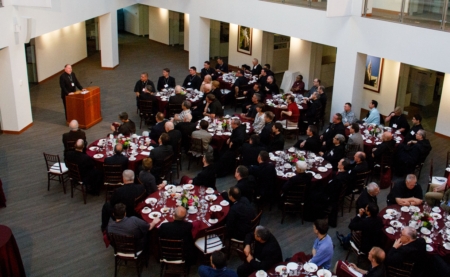 BRIGHTON -- Catholic churchmen from 15 dioceses and 10 priestly orders converged on Boston College, June 20-21, to discuss, explore and address a major concern in the Church -- vocations.

At the "Summit on Vocations: Exploring Ways to Promote Vocations to the Priesthood," archbishops, bishops, priests, vocation directors, Catholic educators, Catholic college and university presidents discussed the results of a recent research study commissioned by Boston College and the Jesuit Conference to assess the impact of higher education on the vocational discernment of men entering the seminary and religious life in the United States.

Father William P. Leahy, S.J., president of Boston College, gave a keynote address at the college's Cadigan Alumni Center on the first day of the summit.

"I remain convinced; there are vocations to be had in our Church -- especially in the United States," he said.

The research study, "The Influence of College Experiences on Vocational Discernment to Priesthood and Religious Life," was conducted by the Center for Applied Research in the Apostolate (CARA) in Washington, and confirmed much of what Father Leahy said in his remarks.

He said the key to tapping into the potential vocations is an example of living "in hope and with faith" demonstrated by priests and religious engaged interpersonally with students.

"There is nothing as powerful as happy, fulfilled priests and religious. That is contagious. That attracts. So, one of the things I think is incumbent upon us is that we guard against pessimism, and that we take on those who may say, 'I wouldn't enter today' or 'I wouldn't be a priest or a religious.' We need to challenge that," Father Leahy said.

He pointed priests and religious toward the frontline defending the faith, by keeping a good attitude.

"If we are not happy, fulfilled, ready to recruit others, they are not going to come," he said.

The survey findings support the idea that Catholic colleges and universities offer a more encouraging environment for vocational discernment and more opportunities to dialogue about vocations.

Father Leahy said the infrastructure of Catholic education still exists as a network to spur vocations.

"We have in the United States -- at least in the higher-ed world -- huge opportunities on our college campuses, and so do we also have possibilities in our high schools. We have a great network. It is not as large as it was, but it is still a great network," Father Leahy said.

He said recruitment for vocations should take a page out of America's favorite pastime, and how major league baseball teams rebuild. He compared owners in that model to bishops, planning a way forward to bring in the right people to nurture progress.

"We have owners. So, you need an owner that will give time and commitment. ...We need a general manager, could be the provincial, could be some superior. We need a field manager, who could be the vocation director -- promoters. And then, we need scouts. We need people who will identify individuals who have talent, inclination, desire -- who can be pointed in the direction of priesthood and religious life," Father Leahy said.

Researchers polled respondents on college coursework, Mass attendance, involvement with campus ministry, experiences with religious retreats, peer friendships, and other topics, to identify the distinct factors at Catholic colleges and universities that influence vocational discernment to diocesan priesthood or religious life, and presented information which suggested that vocations could be stimulated by work similar to that described in Father Leahy's baseball analogy.

"If we would do that as sincerely and as ardently as we do many other things, I believe we would have more and more vocations. The vocations are there. God has not left us orphans. We are not alone," he said.

Father Leahy noted the value of the guests at the summit, from a broad spectrum of the Church, having the opportunity to share information -- such as when James C. Cavendish, an associate professor of sociology at the University of South Florida presented the findings of the research at one of the panel discussions featured during the summit.

"There is just a grand sweep of people here tonight, and I think it bodes so well for the Church that we have all of us present here today, and many of us here tomorrow," Father Leahy said.

Other discussions, talks and panels presented the state of vocations today in relation to emerging strategies and new directions for fostering vocations. One panel featured Archbishop Timothy P. Broglio of the Archdiocese for the Military Services, in the United States.

"In general the exchange of information has been very useful. The results of the CARA study are fascinating. I think also what Father Leahy just had to say about having a good strategy, about investing time and talent in the pursuit of vocations is very, very important -- something that all of us can take home with us," Archbishop Broglio told The Pilot.

Archbishop Carlson celebrated a Mass for vocations on June 20, and Cardinal O'Malley celebrated the closing Mass at Gasson Chapel on June 21.

"A lot of the data that they gave in the CARA study, it really helped to frame the issue -- the whole question of who is and who are the encouragers of priestly and religious vocations," Father Dan Hennessey, archdiocesan vocations director for Boston, told The Pilot.

Boston College, the Archdiocese of Boston and the United States Conference of Catholic Bishops collaborated to present, organize and promote the summit. Financial support came from the Knights of Columbus.