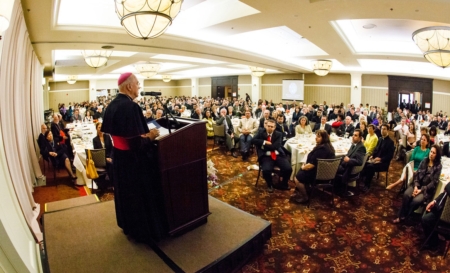 NORWOOD -- Sacrifice in the day-to-day life of one who works to bring the Gospel message to all nations may often go unrecognized, but unites one to Christ according to Archbishop Carlo Maria Vigano, the apostolic nuncio to the United States.

"Your untold sacrifices are truly united every day -- in fact in every moment-- with the one great sacrifice of Jesus the high Priest from the altar of the Cross," he said.

At the Redemptoris Mater Seminary of the Archdiocese of Boston's Fourth Annual Gala Dinner in Norwood, the apostolic nuncio -- the guest of honor -- brought not just the greetings of Pope Francis to more than 400 guests, seminarians and members of the Neocatechumenal Way, he also brought words of encouragement from two previous pontiffs.

On behalf of Pope Francis, he acknowledged those present and their families, saying that the pope would like to have been at the dinner.

"Your welcome tonight to me personally -- so warm and cheerful and full of love -- is the expression that you bear to the Holy Father, to our pope, Pope Francis who in such a short time has already touched our hearts, has given us a very powerful strength to continue on the way as followers of Christ," he said.

He also conveyed encouragement from the pope for the work of the Neocatechumenal Way internationally, reflected in the model of Redemptoris Mater Seminaries throughout the world. The men ordained from the seminary are ordained for the Archdiocese of Boston; however, they are also willing to serve the Church anywhere in the country or the world that they are needed and that the archbishop chooses to send them.

"In addition to forming a genuine ecclesial spirit wherever we are called, the Holy Father has spoken of our having a specific and very important mission, that of keeping alive the relationship between the faith and the cultures -- the cultures of all the peoples of the world, and especially of those to whom you belong and you are sent," the nuncio said.

The vocations of the Redemptoris Mater arise from the Neocatechumenal Way, an international itinerary of faith formation within the Catholic Church. Boston's Redemptoris Mater Seminary was erected by Cardinal O'Malley is 2006.

"Each individual Christian and every community is missionary to the extent that they bring to others and live the Gospel, and testify to God's love for all, especially those experiencing difficulties. Be missionaries of God's love and tenderness! Be missionaries of God's mercy, which always forgives us, always awaits us and loves us dearly," Archbishop Vigano said, quoting a May homily by Pope Francis.

"Despite the many obstacles and difficulties that come our way, there is hope for tomorrow. Hope is a supernatural virtue, as is faith, which is so intrinsically bound to love that has its origins in Christ. And real love, genuine charity, will ultimately conquer evil and save the world," Archbishop Vigano said, recalling Pope Emeritus Benedict XVI apostolic letter "Porta Fidei."

He also quoted a homily by Pope John Paul II given at a local parish in Rome three decades ago for members of the Neocatechumenal Way there.

"My dearest ones, we are living in a period in which we are experiencing a radical confrontation. In this age of ours, we need to rediscover a radical faith -- radically understood, radically lived and radically fulfilled. We have need of such a faith," he recalled the words of Pope John Paul II.

The archbishop delivered his remarks following a video dedicated to missionary outreach throughout the world after the Second Vatican Council undertaken by those following the Neocatechumenal Way.

"With the Solemnity of Christ the King ... the Church will officially bring to a close the Year of Faith -- so proclaimed by Pope Emeritus Benedict XVI to commemorate the 50th anniversary of the Second Vatican Council," said Father Antonio F. Medeiros, the rector of the Redemptoris Mater Seminary in Boston.

"As we know, at such a crucial moment in the life of the Church and of the world, God used an old man, Pope John XXIII, the son of a farmer, as he used to refer to himself, to convoke the Second Vatican Council and to begin the reform that would bring the Church into step with modern times," he said.

Cardinal Seán P. O'Malley gave remarks and closed the gala in prayer. That night the cardinal prayed for fathers celebrating Father's Day, thanked the archbishop and guests for their presence, and commended the seminarians for their work standing ready to answer the call of Christ in the modern world.

"We are so grateful and proud of our seminarians. We thank them for saying yes to this process of discernment. We pray that the Lord will grant them all the grace of perseverance," the cardinal said.

One seminarian afterward said he hoped the visit by Archbishop Vigano would inspire people in the archdiocese.

"It is a great privilege and a great blessing, not only for our seminary, but also for the whole diocese, to have the representative of Pope Francis here together with Cardinal Seán. I hope that this brings many blessings, not only for us and our seminary and our formation, but also for the increase in vocations here in the diocese," Steven Clemence, a seminarian originally from Brazil, said.