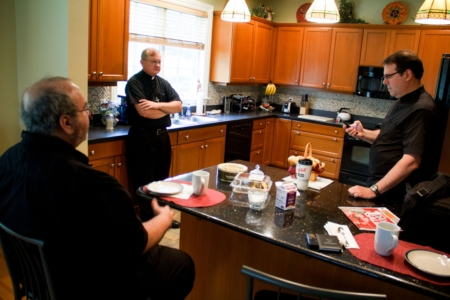 BRAINTREE -- When Father Paul Soper, director of the Office of Pastoral Planning, started driving June 13 to visit collaborative parishes pioneering the plan, "Disciples in Mission: A Pastoral Plan for the Archdiocese of Boston," he had no ace up his sleeve, just the will to keep going for however long it took.

In what was not an unusual work day for him, Father Soper put in a 16-hour day on the road visiting collaborative parishes in Billerica, Lynnfield, Lynn and Salem, where he heard from pastors, parochial vicars and parishioners as parishes began adjusting to life under the new plan.

He allowed The Pilot to ride along and observe his work supporting the collaborative parishes.

"My principle job at the moment is to be certain that the support is being provided, and that the guys are getting the support that they need in doing the work they are doing," he said.

"Also, I have a lot invested in this, and I want to be as sure as I can that everybody is feeling that things are going well. In the places where things aren't going well, if they are not, what do we need to do in order to fix it, in order to get it going?" Father Soper asked.

In offering solutions, Father Soper told parochial vicars they would be getting email addresses to use in communication with pastors and parish communities, he offered pastors advice based on his previous visits to other collaborative parishes, and at one visit ordered a set of maps for a group of priests in need of planning coverage for Mass schedules.

He started his day at 7 a.m., heading north from the Pastoral Center in Braintree toward Billerica to make the 9 a.m. Mass at St. Theresa's with Father Martin G. Dzengeleski, parochial vicar of St. Theresa, St. Andrew and St. Mary Parishes.

After the Mass, Father Soper invited parishioners to speak with him regarding the transition, but none of them said they had any questions or concerns about the new model of pastoral support.

Instead, parishioners expressed enthusiasm for the level of support the collaborative parish communities in Billerica had received from the Office of Pastoral Planning, their pastoral teams, and the parishes in collaboration with them.

"The Church is constantly changing, and this is just another little change, something to actually look forward to," Mary Porter, a parishioner of 54 years, said.

Instead of asking about the new model, one parishioner said she would ask that the Archdiocese of Boston encourage priests to teach the basics of the Catholic faith.

"Our priests need to start speaking out for life. I think they need to explain a little bit more what the teachings are," said Ruth Azevedo, who has been a parishioner since 1955.

As Father Soper visited after the Mass with Father Dzengeleski and Father Shawn W. Allen, pastor at St. Mary, St. Theresa and St. Andrew in Billerica, he had some time to speak with the two men about settling in to life at the collaborative parishes.

"The support that we have had has been incredible, not only Father Paul coming out to visit with us, to sit down and to listen to us, his continual response via email to keep us up to date on what is going on, to check in with us, but the phone calls that we have been getting from people at the Pastoral Center," Father Allen said.

He said the archdiocese's director of benefits, Carol Gustavson, and secretary for faith formation and evangelization, Janet Benestad, had recently contacted him to offer help from their offices.

"The whole level of support has been absolutely incredible," Father Allen said.

Each community had its own set of challenges to update the director of pastoral planning about. The priests he visited updated Father Soper on their efforts to move the right people into the right places in parish staff, address technology needs for parish communications, and even their experiences navigating the streets of a town where GPS does not always work.

At each visit, Father Soper shared information he picked up earlier in the week from visits with other collaborative parish priests.

In Lynnfield, Father Paul E. Ritt asked for materials to promote the new evangelization and the new pastoral planning model at Our Lady of the Assumption and St. Maria Goretti.

"The human anxiety and uncertainty, I think, is there to some measure, but so is the excitement and the energy to move forward," Father Ritt said.

He said it was important to work toward the success of the plan by "over-communicating the vision," explaining "why we are doing this, how important it is that we mobilize our resources to be more effective in giving witness to Christ, and inviting people to join us in active participation in the life of the Church."

Father Ritt said receiving word from Father Soper and the other priests at collaborative parishes indicates a similar experience as each community begins its work.

"It sounds like it has been quite similar. You know, generally speaking, a warm reception from the people, some kind of struggles perhaps working out the rectory, housing, arrangements with the offices, but I think most of what I hear is that people are willing to give this a try," Father Ritt said.

Father Soper met with Father Brian L. Flynn, pastor at St. Mary and Sacred Heart in Lynn, next. Father Flynn has two schools functioning in his collaborative parishes, and faces a different reality from other collaborative communities.

He said the key to administering pastoral and administrative support will be the experience he had working at multiple parishes in South Boston, and openness to the spirit of collaboration between all individuals and entities of the community.

By the evening, Father Soper made it out to St. James in Salem just in time to sit down for dinner with a group of men with almost 110 years of combined pastoral service experience to draw on as they collaborate to lead St. James, St. John, Sainte Anne and Immaculate Conception.

The men said they enjoyed living together -- a component of the new model meant to avoid pastoral isolation -- as an opportunity to share their experiences and as frequently as possible to sit down to break bread in pastoral fraternity gathered for a meal, but also to share the responsibilities to parishes and communities.

"I think it is a matter of sharing, that we are not so haughty that we think that we can do it just by ourselves," Father Rondeau said.

During the dinner the men asked Father Soper to get them a set of street maps for the streets in Salem -- they wanted to familiarize themselves with the roads rather than following GPS. He got on his smartphone for a few minutes during the conversation before asking if the men would prefer laminated maps. Within minutes, Father Soper told the men a set of maps would be shipped to their rectory in the next few days.

"After Jesus Christ, Paul Soper may be the most important person that makes this work because without this support it would be a much, much harder challenge," Father Riley said.

Father Sullivan summed up the attitude that he thinks priests, staff, parishioners and Catholics need to truly become disciples in the mission of the new evangelization under the new model.

On his 50th birthday, Father Soper finished his work at 11 p.m. after going "all in" all day.