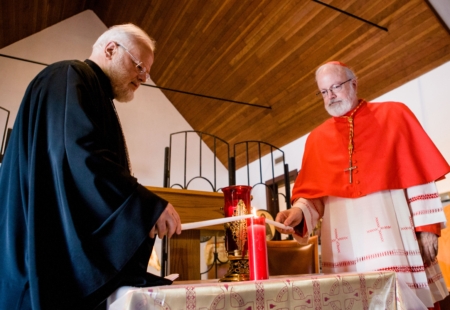 BOSTON -- Fifty years after the Second Vatican Council called for more tangible commitment to Christian unity between Churches, a tradition of ecumenical outreach between Catholics and Greek Orthodox continues this year in Boston on the vigil of the Feast of Sts. Peter and Paul.

Boston Catholics are invited to join Cardinal Seán P. O'Malley, Greek Orthodox Metropolitan Methodios and members of the Orthodox community at St. Joseph Parish in Needham for a celebration of vespers at 7 p.m. on June 28.

In a letter addressed to the metropolitan, delivered on their Easter vigil at the Orthodox Cathedral of the Annunciation, Cardinal O'Malley invited "our Greek Orthodox brothers and sisters" to join him at the celebration, which will be followed by a reception.

"It is my sincere hope that we can be together at that time," the cardinal wrote.

The letter continued years of sentiment between Cardinal O'Malley and Metropolitan Methodios on the matter of Christian unity locally to mirror a tradition in Rome continued on the same day as Pope Francis receives the Patriarch of Constantinople Bartholomew.

Following an improvement in relations between Orthodox and Catholics after the Second Vatican Council, the Ecumenical Patriarch of Constantinople began sending a delegation to Rome for the Feast of Saints Peter and Paul, patron saints of the Diocese of Rome. In return, the Vatican sends a delegation to Constantinople for the Feast of St. Andrew, patron of the Greek Orthodox Mother Church of Constantinople. This tradition has been mirrored in Boston between the two communities and their leaders recently.

The cardinal and the metropolitan led a group of Boston Catholics and Orthodox to Rome and Constantinople on pilgrimage in 2007. Since then the cardinal and the metropolitan observed and kept a tradition in Boston to invite the Greek Orthodox to the Feast of Saints Peter and Paul followed by an invitation to the Catholics to the Feast of St. Andrew.

Cardinal O'Malley acclaimed the significance of dialogue between Catholics and Greek Orthodox in light of recent developments and the good work done as the two Churches came together in recent times to defend life.

"The Holy Spirit has been present as we joined together in persevering against Physician Assisted Suicide and as we ministered to the city of Boston and the Commonwealth at the recent interfaith service of healing at the Cathedral of the Holy Cross," he said.

In recognition of his friendship with the metropolitan and friendship between the Churches, the cardinal used the Greek word "koinonia," meaning "communion," to express fellowship with the Greek Orthodox community in Boston.

"With deep gratitude for all that you do to bring our Churches together in prayer I give praise to Christ Our Savior who by his Incarnation, Sacrifice, and Resurrection has incorporated all God's people together into the eternal koinonia of the Blessed Trinity," the cardinal said.