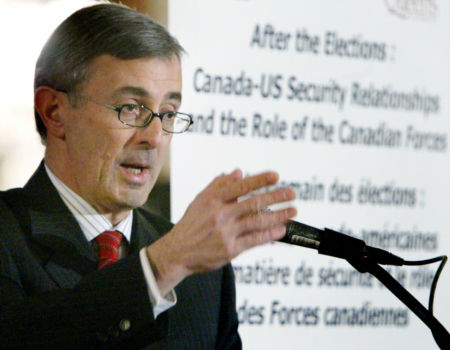 Former Massachusetts Gov. Paul Cellucci, 65, who served as ambassador to Canada during 9/11, speaks at the Canadian Conference of Defense Associations in Ottawa in this 2005 file photo. Cellucci, a Catholic, died June 8 after a five-year battle with Lou Gehrig's disease. (CNS photo/Chris Wattie, Reuters)

BOSTON (CNS) -- Paul Cellucci, who served as governor of Massachusetts and was U.S. ambassador to Canada during the Sept. 11 attacks, died June 8 of complications from amyotrophic lateral sclerosis, commonly known as Lou Gehrig's disease. He was 65 years old.

A funeral Mass was scheduled for June 14 at St. Michael Parish in Hudson, his hometown.

A Republican, Cellucci was the last native of Massachusetts to serve as governor of the state. He held the distinction of never having lost an election in more than three decades in public office in the overwhelmingly Democratic state.

Cellucci supported the U.S. Supreme Court's Roe v. Wade decision, which legalized abortion, much to the disappointment of Catholic leaders. While he was lieutenant governor, Cardinal Bernard F. Law, then archbishop of Boston, rescinded his invitation as commencement speaker at his alma mater, Hudson Catholic High School. As governor he pushed for reinstating the death penalty but was unsuccessful.

Massachusetts political leaders credited Cellucci for his willingness to work across party lines in the best interests of the state of Massachusetts.

Canadian observers recalled Cellucci for his spirit of cooperation and noted that he regularly attended Mass at Notre Dame Cathedral Basilica in Ottawa, Ontario.

In a tribute to Cellucci, Canada's Foreign Affairs Minister John Baird said, "I can attest to the fact he was a great friend to Canada, and we are grateful for his contributions to the bilateral relationship, both as ambassador and as governor of Massachusetts."

Cellucci spearheaded an effort to raise funds for ALS research at the University of Massachusetts Medical School after he publicly revealed his diagnosis in 2011.

He served in the Massachusetts House of Representatives and Senate before being elected the state's lieutenant governor in 1991.

Cellucci is survived by his wife, Jan, daughters Kate and Anne, and four grandchildren.